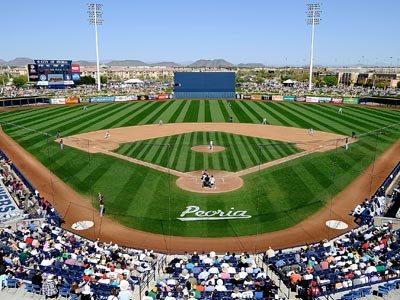 As Brett mentioned in the lineup post earlier today, a number of non-regulars are getting the start today against the Padres.

Jon Jay (LF) and Albert Almora (CF) are in there, however, as is Willson Contreras, who figures to catch today’s starter John Lackey for much of the the 2017 season.

Contreras did catch Lackey a fair amount last season, but given the expected increase in exposure behind the plate, more practice together is a very good thing.

The Cubs have lost four of five, by the way, each of which was lost late. In fact, despite the losses, the Cubs’ offense has been very much alive lately, scoring 35 runs during that five-game stretch. Hopefully, the prospects keep up the pace today, and Lackey can lock things down long enough.

Or, you know, not, because Spring Training wins and loses don’t matter.

Today’s game is being broadcast by the Padres (Fox Sports San Diego), so it’ll be available on MLB.tv. The Cubs-based audio will be available at MLB.com. For future reference, you can check which games will be televised here.