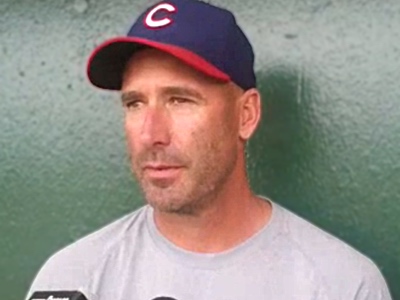 While the 2016 Chicago Cubs’ defense was probably good enough to make many solid pitchers look really great, the Cubs rotation and bullpen obviously deserves most of the credit for their performance last year.

Together, the fifteen or so pitchers who carried a majority of the innings last season kept a potent Cubs’ offense close enough to feel that no game was out of reach.

But even the most talented pitchers in Major League Baseball will credit their coaches and supporting staff for helping put them in the best possible position to succeed.

To that end, the Cubs clearly have two of the very best in catching/strategy coach/secret weapon (we’ll get to that in a second) Mike Borzello, and pitching coach Chris Bosio.

But before you go heaping even more praise on the 2015 NL Manager of the Year and 2016 World Series Champion manager Joe Maddon, you should know that, although he has kept Borzello and Bosio on staff, Maddon had nothing to do with their hiring.

In fact, it wasn’t even the Cubs’ last manager, Rick Renteria, who brought these two hidden gems into the Cubs organization. Instead, it was the first manager hired by the current Cubs’ front office: Dale Sveum.

At CSN Chicago, Patrick Mooney writes about how each of Borzello and Bosio was almost fatefully brought into the Cubs’ organization by Sveum by a confluence of luck, timing, and other unexpected circumstances.

Sveum helps paint a picture of the different, but great value they add (CSN):

And I’ll tell you what – the more you look at each of these coaches’ histories, the more impressed you’ll be by Sveum’s decision to bring them into the fold.

While each has plenty of roots in “baseball,” it’s not as though they were the next budding stars. And Borzello, according to Sveum, even earned an abrasive reputation – something Sveum saw as something closer to brutal honesty: “Borz’ doesn’t care who you are, how much money you’re making, he’s going to freaking tell you [what’s your fault].”

What’s most clear from all of this, however, is that the Cubs’ pitchers love working with these two guys. Perhaps the highest praise comes from Kyle Hendricks, who suggests (and clearly acts on the fact that) the knowledge in their noggins is invaluable.

It’s easy enough to look up and down the Cubs’ pitching arsenal and see the impact of these two coaches on a team that won the World Series in 2016.

And Dale Sveum brought them in.

So head over to CSN Chicago to learn more about Bosio, Borzello, and the decision Sveum made several years ago that changed the course of Cubs’ history forever.