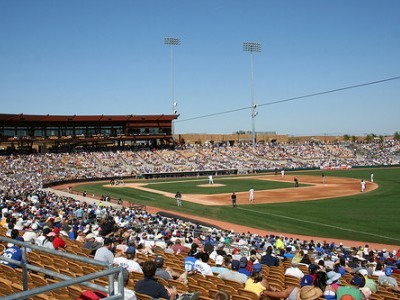 It’s a rematch of the NLCS!

It’s a Spring Training game in March with less than a handful of regulars.

Either way you look at it, the Chicago Cubs will be taking on the Los Angeles Dodgers today at Camelback Ranch.

As we discussed earlier, Ian Happ will be in the lineup, looking to reclaim his home run champion crown, while other notable youngsters like Albert Almora and Jeimer Candelario show off what they can do.

Tommy La Stella is also playing third and leading off. All things equal, he may have had the inside track on the final roster spot, but of course not all things are equal.

Eddie Butler grabs another start and remains one of the more interesting Cubs’ lottery tickets to watch in 2017.

His spring has been going fine so far, but there hasn’t really been much to dissect yet (6.0 IP). One thing to look out for is his K/BB ratio. Right now he has an equal number of strikeouts (2) and walks (2). Hopefully, he can improve on that going forward.

Today’s game is being broadcast by the Dodgers on SportsNet LA and MLB Network. The Cubs-based audio will be available at MLB.com. For future reference, you can check which games will be televised here.