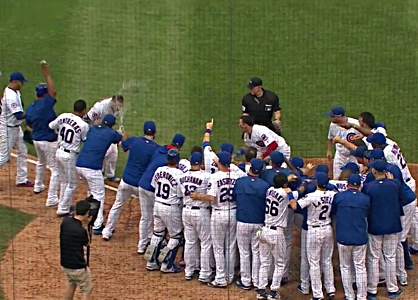 The Chicago Cubs muscled up yesterday for five home runs between their two games (four of them in the Milwaukee game), and on this fine Sunday morning, I thought you might enjoy checking them all out with a little discussion.

We already looked at Addison Russell’s shot yesterday, specifically, since it was his team-leading fourth blast of the spring. But once is never enough:

There were three other shots in that game, though, including this quintessential Anthony Rizzo blast:

Rizzo stays with the pitch, gets low and under it, and then absolutely crushes it. You can see the 400′ sign there as his ball goes another 40 or so feet.

Fresh off his time with Team Italy in the WBC, where he homered three times in just 19 at bats, John Andreoli is keeping it going:

We’ve talked about Andreoli’s latent power before, as he had a power surge the last couple Spring Trainings, and then saw his ISO increase by a good clip over the year before each time. In that video, when they show the slowed down side view, you can see: that’s a home run swing. He gets good leverage, a nice mild uppercut, and a ton of weight transfer at the point of contact. This is clearly a guy who is trying to hit for power, and another step forward in that department at AAA this year would not surprise me at all.

At 27, with great speed, developing power, and a 15.2% walk rate at AAA last year, this is a guy who could break out and offer a ton of value (though the increase to a 26.3% K rate at AAA last year is what you want to watch closely, because that was probably the price of the increasing power). A reserve outfielder spot is not available right now on the Cubs, though, and, even if one opens up, Andreoli may be hurt by the fact that Jacob Hannemann can offer similar bench value with a slightly better glove and a lefty bat, and is already on the 40-man roster. Still, Hannemann clearly needs more developmental time in the minors, and I’m not sure that Andreoli does.

Like Andreoli, the one piece of Hannemann’s game that really needs to take a step forward for his game to translate well to the bigs is in the power department. And like Andreoli, it’s started to develop for Hannemann as he’s moved up through the minors. Now, Hannemann just needs to stay healthy for a full year, and let his progression continue – note that last year, in a return to AA, Hannemann increased his walk rate by 15%, decreased his strikeout rate by 30%, increased his ISO by 50 points, and posted a 119 wRC while playing stellar defense and stealing 26 bases in half of a season. Yes, he’ll turn 26 this year, but you’re reminded that he’s had only three full professional seasons in which to develop (after playing only one year in college).

And finally from the homer party, it was the homer in the other Cubs game, from prospect David Bote:

Bote, 23, has moved up and down throughout the Cubs’ farm system the last few years as needs have developed, which, in all candor, isn’t always the sign of a top prospect. Mostly a corner infielder at this point, Bote spent most of his 2016 season at High-A Myrtle Beach, where he crushed it: .337/.410/.518, 158 wRC+ (the .378 BABIP helped a great deal). Just keep swinging the bat, young man, and who knows what might happen.