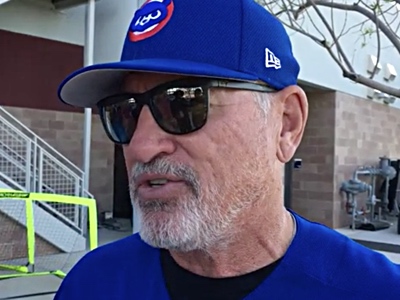 Chicago Cubs manager Joe Maddon spoke with the media this weekend about his plans for the batting order when the season rolls around, and, while we already knew that the intention was to bat Kyle Schwarber leadoff, Maddon confirmed another suspicion: the pitcher will probably be batting 8th.

From the ESPN video:

Last year, Maddon more frequently batted the pitcher 9th when it was a guy whom you might expect to go deeper into the ballgame (Jon Lester, Jake Arrieta) on the theory that it buys you one extra spot before you might have to make a pinch hitter decision in the middle-to-late innings.

Will that still be the case in 2017, or will we more frequently see those guys batting 8th?

For now, it seems like Schwarber’s presence will dictate the decision more than the identity of the pitcher. My gut says that’s the right approach, given that Schwarber will see three or four plate appearances in a typical game after leading things off. Compare that to the relatively small chance that Lester would come to the plate in, say, the 6th inning with two outs and runners on base in a close game that he’s pitching well enough to stay in (but not SO well that it’s obvious he’d stay in no matter what), but wouldn’t have come to the plate if only he were batting 9th. That’s a real consideration, but it does seem rare enough that the possible upgrade for the three or four plate appearances for Schwarber, which you know will happen, should take precedent.

Keeping those lights on: Check out Chicago Cubs goodies at Amazon, which supports BN in the process.