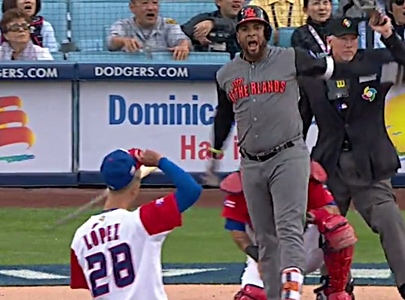 I mostly said my peace about baseball, emotion, and the World Baseball Classic this morning, but I thought this worth passing on as a perfect example of how the sport does NOT need to show itself to future fans …

In this New York Times piece about the contrasting styles in the WBC, author Billy Witz correctly points out “how staid and emotionally calibrated the Americans often seem in contrast to the bat-flipping, chest-thumping, flag-waving players from — well, pretty much every other team in the tournament.” I would argue that “emotionally calibrated” can go both ways, but the point is well-taken. The American team, generally, keeps its emotional outbursts hidden, or at least, measured. Other teams in the tournament have let it all hang out.

I’m going to let that sit a bit before I completely lose my mind. Kinsler almost saves it by the end, but I can’t get over the first sentence. It does not read like someone who is trying to say that there are different ways to show emotion and passion, and all ways are great. Maybe that was Kinsler’s point, and he simply did a terrible job elucidating it.

I do hope that tonight’s game is full of emotion – however players want to show it – and I can’t wait to show the raucous highlights to my kids.