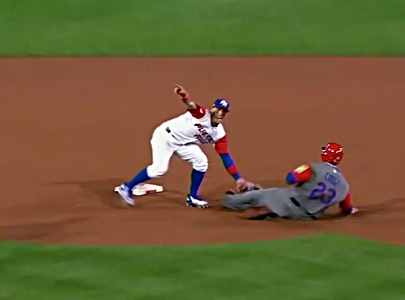 When you become nearly synonymous with everything that is good, exciting, and fun in a particular sporting event, you’re probably going to be recognized for it.

So it is with Javy Baez, whose play in the World Baseball Classic for Team Puerto Rico was at once stellar and also captivating:

Stars emerged across the globe during #WBC2017 … Introducing the All-WBC team. pic.twitter.com/Wguhzel8an

Many deserving names there, with a special nod to Baez’s teammates on the infield. Heavy expectations were placed on the young group from the moment the rosters were announced, and they lived up to it.

It was a full, and hopefully special WBC experience for Baez, who not only helped his team to the Championship game, but also showed up in highlight after highlight after highlight. Now he’ll return to the Cubs, where he figures to play a role similar to what he did last year, though perhaps with more starts sprinkled in. He’s too good and impactful to keep off the field for too long.

If Baez keeps landing these kinds of honors, they’re going to name a street after him. Oh, wait, they’re already doing that …