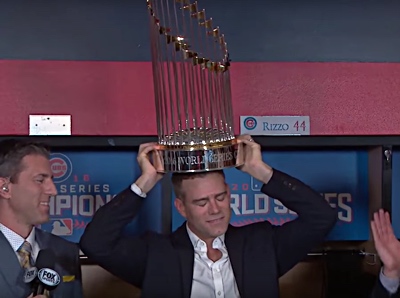 If you tell Chicago Cubs fans that Theo Epstein is the greatest leader in the world, you’re probably not going to get too much of an argument after he shepherded the organization through a rebuilding process that culminated in its first World Series title in 108 years.

Will everyone else argue, though?

Today, Fortune Magazine revealed its list of the top leaders in the world, and Chicago Cubs President of Baseball Operations Theo Epstein sat at the top:

You can read the full profile of Epstein here, and see the full list here. It appears that Tom Verducci’s forthcoming book on the Cubs, The Cubs Way, heavily informs the Epstein profile. A selection that will strike you just right, and remind you that – whether he’s the best in the world or not – Epstein is a fantastic leader:

They never stopped searching to find edges, but they made a fundamental decision early after coming to Chicago that the one edge they could exploit was found in a very old-school resource: people.

As for Epstein, he had a typically humorous response to the honor, which he sent to ESPN’s Buster Olney: “Um, I can’t even get my dog to stop peeing in the house.”

In all seriousness, Epstein went on to tell Olney that there’s so much chance in baseball that this kind of label for him is “patently ridiculous,” and the best leaders on the Cubs are the players.