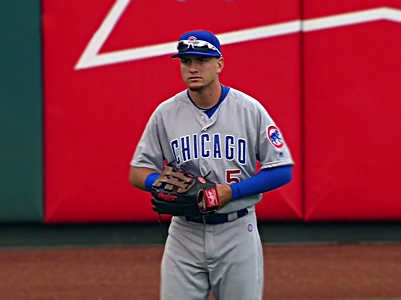 Early in today’s game against the Indians, center fielder Albert Almora Jr. dove for a ball in the outfield, which is a regular part of his game. After taking his next at bat, and looking visibly uncomfortable according to those who could see, Almora was removed from the game.

Presumably, we’ll know more this weekend about Almora’s status going forward. As we always caution in the spring, teams are much more conservative than they would be in the regular season, and that figures to be especially true for a promising young player like Almora.

Fortunately for the Cubs, should Almora have to be out a while, extending into the regular season, the team can still be reasonably well covered in the outfield, either by way of playing Jon Jay regularly, moving Jason Heyward to center field (and playing, for example, Ben Zobrist in right field), or moving Matt Szczur into the platoon center field role vacated by Almora (which would have the beneficial byproduct of allowing the Cubs to keep both Szczur and Tommy La Stella for at least a little while).

I don’t want to speculate too much on any roster/playing time stuff until we actually know more about Almora’s injury. Hopefully we’ll know soon, and hopefully it won’t be serious.

UPDATE: Whew. Sounds good to me:

Almora should be fine, scheduled to accompany split-squad team to Vegas.

Almora Jr. is expected to play Saturday at Las Vegas.