Kris Bryant, Baseball, True Love, And a Story That's (Almost) Too Good to be True Skip to content 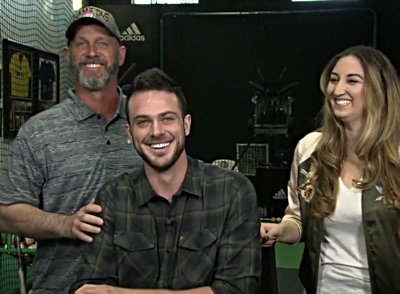 We often discuss the fact that Javy Baez is one of baseball’s brightest, burgeoning stars, and it’s as true now as ever. But in reality, he’s not the only one in the game. Not by a long shot.

On the Chicago Cubs, alone, you can name at least three other young position players – Anthony Rizzo, Kyle Schwarber, and Kris Bryant – who are as (if not more) well-known than Baez.

All four are deserving of attention, of course – and it’s not a competition – it just so happens that the Cubs are loaded with great players (that all happened to be huge parts of breaking the longest championship drought in sports history).

But despite the both talented and marketable group of Cubs’ players entering the National, its the lattermost, Kris Bryant, whose star shines brightest. You know the story.

Kris Bryant has the talent, the looks, the demeanor, the class, and, frankly, the adoration of fans across America to be the face of Major League Baseball. But is the story too good to be true? No. It may be too good, but it’s all true.

Kris Bryant was born to win, and Tom Verducci has the entire profile at Sports Illustrated.

Leading off with “Everything you are about to read is true, though at times it may sound too good to be so,” Verducci’s latest at Sports Illustrated is a detailed profile on the Cubs and baseball’s biggest, brightest star.

As we’ve covered, Bryant has almost everything a marketer could want and the talent to back any of it up. And aside from everything we already know about his skills, stats, and place in history, Bryant is also one of just two baseball players in the history of the sport to hit 60+ home runs and win a World Series during his first two years as a pro. The other guy: Joe DiMaggio.

And that’s the crux of Verducci’s lengthy piece. Kris Bryant is not just a star, he’s a transcendent one. A talent that reminds us of a different time in baseball.

In other words, he’s classic: “The charmed baseball life of Kris Bryant seems an invention of nostalgia, ripped from the Chip Hilton novels of Clair Bee in the 1950s and ’60s.”

So if you’re looking for a (true) story about first love, the connection between fathers and sons, and a splash (or two) of baseball, then you’re going to want to give Verducci’s piece a read. Kris Bryant may already be a special player, but he may soon be a special part of baseball history.

And that’s just what the sport – and we all – need.