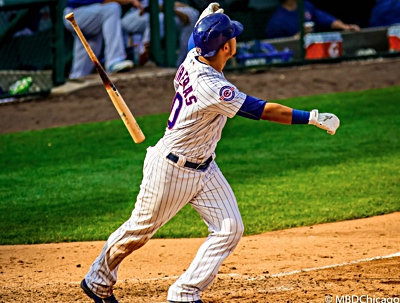 Perhaps the headline should clarify that the video available in this here post is not of me shouting “WILLLLLSONNNNN” as I’m prone to do when Willson Contreras homers, but of the young Cubs catcher going deep.

It was a no doubter off of Danny Salazar:

That was Contreras’ fourth homer of the Spring, and he hasn’t showed any signs that his power surge last year is going to wear off any time soon. His .206 ISO in the big leagues last year (and .240 in his first stint at AAA in the first half of the year) was significantly higher than at any of his minor league stops from before 2016.

That is to say, Contreras broke out in 2015 with his line drive stroke and discipline gains, and then added quite a bit of pop in 2016. So, what’s in store for 2017? My guess is he looks even better behind the plate, and the bat keeps playin’.

UPDATE: He did it again!

That thing was a freaking shooting star, carrying the hopes and dreams of millions straight out to the opposite field.