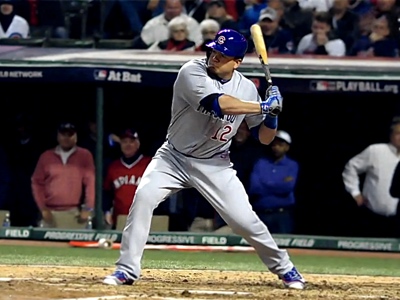 Well, what can I say?

After already launching a lead-off homer in the first inning of today’s game, Kyle Schwarber took another out to right field in the bottom of the fourth:

Like last time, thanks to Cubs Insider for popping this video up promptly.

If you’re keeping score at home, that two-run blast was Schwarber’s second of the day and fifth on the Spring. I guess that dude is feeling the heat (or, you know, 40-degree overcast skies) of the regular season in Chicago.

But he wasn’t the only one to add to the Cubs home run pot. Willson Contreras also hit one out this afternoon, but his came an inning prior to Schwarber’s second blast:

Again. Cubs Insider. Thanks for the video.

That was Contreras’ sixth home run on the Spring, as he tried to squash any questions regarding the power surge that took over his bat for the past two years. At this rate, there’ll be about four more homer posts before the afternoon is over.

Update: Perhaps this is unnecessary, but I feel obliged to share this amazingly appropriate Schwarber gif, given his day at the plate: