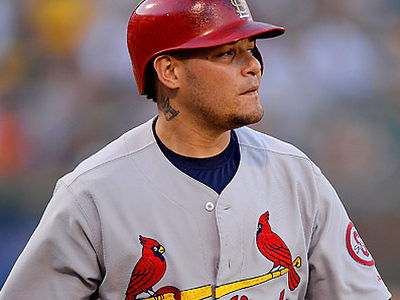 Yadier Molina was entering the final year of a five-year, $75 million deal signed in 2012 and started making noise about free agency … but it doesn’t look like leaving the only organization he’s known is in the cards:

Molina was drafted by the Cardinals in 2000, made his Major League debut in 2004, and has been a mainstay behind the plate ever since. He has made seven All-Star teams, won eight Gold Gloves, two World Series rings, and owns a career .285/.338/.400 slash line in 6,157 plate appearances.

Like him or lump him, Molina is one of the best catchers in baseball, even at his age, and a great deal of his value cannot be quantified by the metrics we have available.

Seeing Molina on a team other than the Cardinals would have been odd, but it was a distinct possibility as recently as a few days ago. Molina, 35 in July, believes he has a lot left in the tank and was seemingly prepared to test free agency because he wasn’t going to continue negotiations once the season began.

But if this extension goes through, that scenario will have been avoided altogether.