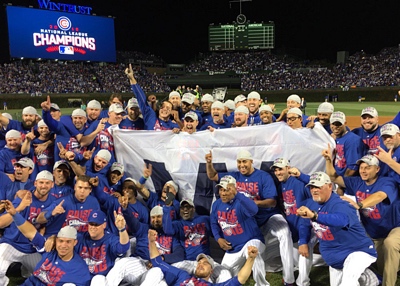 With the 2017 regular season just a day away, it’s time to dig back into a time-honored (for the past couple years, anyway) tradition: playoff odds!

It may seem a strange thing to talk about the Cubs’ odds of making the playoffs before a single regular season game has even been played, but I’d counter that it actually makes a great deal of sense to lay down a baseline, now that rosters are set. On paper, just how good are these Cubs? Just how likely are they to make the playoffs, here and now, before the games get going?

FiveThirtyEight dropped its opening playoff odds report, and the Cubs come in up top, with an 84% chance of making the playoffs, given their roster, schedule, and division. In the preseason, that number is obviously incredibly high. But, consider that the Cubs are not only very good, but their division also looks mediocre behind them. Thus, of that 84% playoff chance, a full 70 percentage points are coming from the Cubs’ chances to win their division – the highest figure in baseball, topping the Indians in the AL Central (63%).

Overall, the second place playoff odds team is the Dodgers, at a 77% chance to make the playoffs. The Cardinals and Pirates stand at just 31% and 28%, respectively.

Incredibly, the Padres have a 6% chance of making the playoffs, which I can only assume is coterminous with the odds that a meteor strikes the earth in precisely the location that the other 14 NL teams happen to be gathered for a Not Padres Club meeting.

FiveThirtyEight already has the Cubs at 14% to win the World Series.

At FanGraphs, the Cubs’ playoff odds are even more herculean, at a whopping 95.6% (86.3% to win the division). Those are the kinds of numbers you see when the projection system cannot possibly fathom a team realistically not making the playoffs. Which, well, great! Unless the Cubs don’t make the playoffs, in which case this season will be remembered as one of the most disappointing (in terms of projections) in recent memory.

FanGraphs actually digs the Cardinals, relatively speaking, with a 45.9% chance to make the playoffs (10.8% to win the division). The Dodgers come in just behind the Cubs, at a 95.3% chance to make the playoffs. In fact, FanGraphs sees an extraordinarily uncompetitive National League this year, with all of the Cubs, Dodgers, and Nationals huge favorites to win their divisions. (FiveThirtyEight, by contrast, sees the NL West and NL East as much more competitive.)

Finally, at Baseball Prospectus, the Cubs are at 80.6% to make the playoffs, and 65.4% to win the division. That’s a much more competitive divisional figure than at the other services, as BP sees the Pirates at 16.0% to take the division (they’d be my number two projected NL Central team, too). By contrast, the Cardinals are all the way down at 7.3% to win the division … lower than the Brewers, at 8.2%.

The Cubs’ overall playoff number is 10 percentage points lower than the Dodgers, and a hair below the Indians.

The Cubs have a 11.6% chance of winning the World Series, according to BP, which is still quite high, but three teams project right now to have a better chance to make that run through the playoffs: the Astros (12.1%), the Indians (14.2%), and the Dodgers (17.4%).

… so what you’re saying is that nobody believes in the Cubs, and they are now the underdog darlings of baseball.