The Bright Side of Last Night's Cubs Loss? You Still Feel Feelings Skip to content 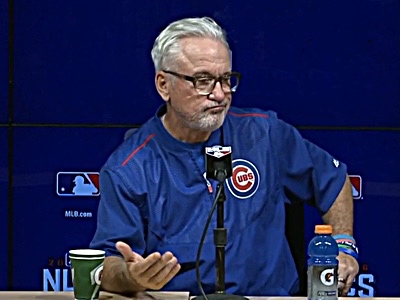 The Chicago Cubs’ World Series run, preceded by a months-long stretch where a postseason berth was effectively assured, made for an entirely different game-watching experience than you might typically feel during the regular season.

Maybe it’s a good thing, then, in the long run of our sanity, that we were reminded right out of the gate that (1) the Cubs don’t always win, (2) even when they have a thrilling comeback, and (3) those kinds of losses, especially against a rival like the Cardinals, reeeeeally suck to experience.

That’s how it was last night as the Cubs kicked off their 2017 season as reigning champions, and the Cardinals informed onlookers that there would be no ongoing coronation.

For me, personally, I was treated to the following discomforts of covering the Cubs, all in the first game:

(1) Late, dramatic shifts in the game totally screw up the EBS and the write-up, and the worst version of that is when the Cubs come back, only to lose immediately thereafter.

(2) I have a much harder time getting to sleep after a close, tight, late loss than any other type of Cubs game.

(3) The morning after a close, tight, late loss is such a freaking grind.

(4) Off-days after a loss are brutal.

The good news is that none of those things would really be the case if I didn’t care at all about the outcomes of these regular season games.

In other words, that’s another thing to which we were treated last night: even after the World Series win, yes, you’re still going to care enough about regular season Cubs games to be frustrated as hell by the bits and pieces of a game that could have gone differently.

I’m probably more chill about it than I would have been if, say, Jason Kipnis’s 9th inning foul ball in Game Seven had actually been a walk-off homer. But I’m still freaking annoyed by the missed scoring opportunity in the 8th inning, by the 0-2 homer Randal Grichuk hit, and a half dozen other things.

Hooray! The Cubs can still make me unhappy!

I’m being a little tongue-in-cheek, but not entirely – being frustrated by last night’s loss reminds me that I’m still going to feel passionately about the wins, and the great moments within them (also confirmed by Willson Contreras’s 9th inning homer).

As for the game itself, I’m certainly not going to complain about the strike zone overall, which seemed to favor the Cubs (and a review at Brooks confirms). Even the Kolten Wong walk in the 9th inning was close:

The high missed strike there was a big bender that almost never gets called a strike, and the one on the inside corner was obviously as close as it gets. Mike Montgomery didn’t get either of those calls, Wong walked, and then Grichuk won it.

The Cardinals had been 0-11 with runners in scoring position until that hit.

The Cubs got a bad break on the grounder Javy Baez couldn’t see because of the sign behind the plate, but the Cubs got a break from the backstop when a Carl Edwards Jr. wild pitch ricocheted back perfectly to home plate, preventing another Cardinals run from scoring.

In the end, the Cardinals got a fantastic performance from Carlos Martinez, topping Jon Lester’s very solid performance, and that may have been the biggest difference in the game (all those zeroes in the early innings count, too). It won’t always end in a dramatic top and bottom of the 9th, but the kind of loss where the other team’s pitcher simply does his thing is going to happen many times over this year.

There’s more to say about the game, and I’ll get into it in the Bullets. First thing this morning, I just had to get some of this out, and shake off the rust of not having to process a frustrating Cubs loss for the past five months.

And now we get an off-day.