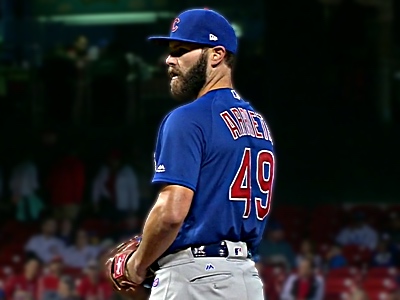 Last night, Jake Arrieta made his 2017 debut for the Chicago Cubs, and it was good … like, really good.

He also managed to keep his pitch count well under control (90 pitches), which has been a problem for him in the past. Overall, then, the results were nothing short of vintage Jake.

And hey, he certainly looked the part, starting with a strikeout of the game’s first batter (and old friend), Dexter Fowler:

When Arrieta can locate his fastball on the outer edge like this, watch out. pic.twitter.com/QxooWXajbv

(Video of his start is not embeddable, but you can watch the highlights here)

As we all know by now, Jake Arrieta can be as dominant any other pitcher in baseball (and I mean that) when he can command his fastball like that. It’s not just about throwing the fastball for strikes, mind you, it’s about setting batters up. When they know there’s a chance he can dot a 95 MPH heater right over the outer third of the plate, they have to be ready to swing at anything … and THAT’S when Arrieta can start throwing his nastier, offspeed stuff to generate whiffs.

That he was able to freeze Dexter Fowler – who has one of the best batting eyes in the game – with a fastball on the outside corner in the first at bat of the game was immediately reason to believe good things were coming. And they did.

For the first three innings of yesterday’s start, Arrieta was perfect against the Cardinals. It wasn’t until Fowler’s single in the fourth inning that anyone had even reached base. By the time he left the game, Arrieta wound up allowing only four hits (all singles), and it’s on those hits that I’d like to linger for a moment.

Last season, even during Arrieta’s struggles, he was exceptionally good at inducing weak contact. Consider that by the end of the year, he allowed the third lowest hard-hit rate (25.2%) and the fourth highest soft-hit rate (22.9%) among all qualified starting pitchers. Well, that trend continued last night, as just one base hit exceeded 90 MPH, while the other three were below 73 MPH:

Only two balls all night exceeded 100 MPH off of the bat – a Matt Carpenter line out to Jason Heyward, and a Kolten Wong ground out to Javy Baez. Both were nice plays. (Exit velocity data via the Statcast search at Baseball Savant.)

That contact management is very impressive, but also what we’ve come to expect from Arrieta. The difference for Arrieta last night, then, is that he was able to combine his consistent weak contact skills with his not-always-present impeccable command. That combination, when it’s working for him, is what leads to stretches like the second half of 2015.

And for what it’s worth, Arrieta felt very good about his start.

You can watch him discuss some of the particulars in his postgame interview here at CSN Chicago, but suffice it to say, he felt that he succeeded because he had good command of his pitches. And when he allowed some more base runners in the fifth and sixth, he said it was because he started getting sloppy with his mechanics and began to over-rotate. Sometimes it’s that simple. And for the first start of the season, that is more than OK.

“Jake really looked good from the side,” Maddon said via CSN Chicago. “The ball was moving a lot. It was very reminiscent of a couple years ago, his strike-throwing and the way the hitters reacted to the pitch.”

Indeed, 55 of Jake’s 90 pitchers from last night went for strikes, and he was aggressively attacking the strike zone.

Typically, this would be the place where I’d like to share the velocity readings and whiff counts from last night’s game, but unfortunately, the tracking system for pitches was a bit jumbled last night (Spring Training for the data tracking?), so the data is incomplete. For our purposes (and without knowing which pitches were tracked accurately or not) that makes the data effectively unusable.

Even without that data, by both my eye and the results, Jake Arrieta was his vintage, nasty self for most of the game. And given that this may very well be his final season with the Cubs, I’m very glad that version showed up.

Here’s to 31 more just like it. And then about five more after that.