There is No Modern Face of Baseball? Well, How About Kris Bryant? Skip to content 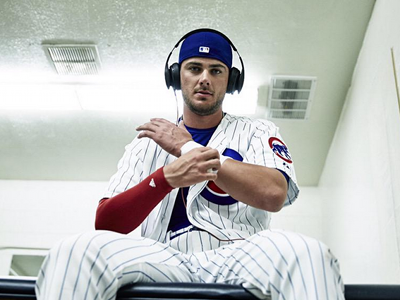 At ESPN, Jayson Stark relays a concerning truth revealed by a recent poll: Baseball has no face.

By that, of course, he means that no one Major League Baseball player stands out above the rest, representing the sport on the national and international level.

Indeed, in a survey that asked 6,000 American sports fans ages 12 and up who their favorite pro athlete was, only three baseball players made it into the top 50.

Anthony Rizzo, for what it’s worth, did clock in at number 51, but that’s not much to celebrate – at least, not from MLB’s perspective (it’s pretty neat from a Cubs fan perspective, though!).

Someone needs to step up and take on that role for the future of the sport as a whole, and that person may be the Cubs’ own Kris Bryant.

But let’s take a step back.

In the article, Stark poses the question, “Could any baseball player be MLB’s version of LeBron James? And he framed it that way, because – according to the polls – 23% of avid NBA fans consider LeBron James to be their favorite player. In baseball, however, the highest total any one player received was 2.9%.

As you may have guessed by now, that guy was Kris Bryant. And why not? He’s coming off of championship, an MVP, and a number of endorsements. He’s young, talented, handsome, and almost too good to be true all around.

So you see, Bryant has the best shot of becoming the face of the sport, but he very clearly has quite a ways to go. One of the problems, according to a Detroit Pistons executive, is that the best baseball player rarely ever wins the final game of the year – at least, compared to the NBA:

“If you look at the modern NBA, it was Magic [Johnson] and [Larry] Bird, leading into Isiah [Thomas] and Jordan … and now Steph Curry, along with LeBron. And the best player usually wins the last game of the season, or is in the last game of the season. So the NBA playoffs and Finals are a tremendous showcase for the greatest players and the greatest athletes in this country.”

Well, fortunately for Bryant, the Cubs, and Major League Baseball, that changed this past November:

So is Bryant destined to be the next MLB superstar?

We’ve discussed the possibility that Bryant could be the face of the league in the recent past (as well as the fact that the Cubs are single-handedly improving baseball’s popularity), but there’s still one more perceived problem to overcome: his age.

According to Stark, Bryant’s age and lack of experience in the league is another issue holding him and MLB back. “The most popular active player in the NFL is Tom Brady. He’s 39 years old. The most popular player in the NBA is LeBron. He’s only 32, but this is his 14th season.” It’s not difficult to see how this can be a sticking point. Sure, you can argue that younger players are more likely to connect with younger fans, but it’s not easy to compete against 15-20 years of national and international recognition.

But that doesn’t mean MLB (and the Cubs organization) isn’t trying. In the past few months alone, we’ve seen Bryant featured in a number of promotional events. From being pranked by Greg Maddux and returning to his old high school in Red Bull promos, to the updated (and always excellent) Bryzzo Souvenir Company, Bryant has inched closer and closer to the general public’s field of view.

And he certainly has the support of his teammates. As well as one former teammate, who is himself getting a lot of national attention.

David Ross suggested that Bryant can indeed become the face of baseball, because “he already is that perfect.” He’s the guy, according to Ross, that is just happy to play baseball for a living. That’s a personality trait that, to use Ross’ own words, makes Bryant sick (in a loving sort of way, of course), and is way too darn good at it. Ross heaps praise on Bryant for two full paragraphs, so if you want to see why he considers Bryant to be “the golden child,” I suggest you take a peek at Stark’s piece.

Beyond that, Stark even wonders if the Cubs’ themselves (as a whole) are becoming something close to the face of baseball (from a team perspective). Bill Sutton, the director of the Sports and Entertainment Management MBA program at the University of South Florida, suggests that the current Chicago Cubs are the first team since the 1950s and 1960s Yankees to truly take on that roll (woah).

And it’s not just because of their similarly dominant ways.

Instead, it’s because the Cubs are a team that embraces personality in a sport that seems determined to suppress it (hello, Baseball is supposed to be Fun). But more importantly, the Cubs showed that you CAN still win, even when you’re having fun. To Sutton, that was a vital lesson to be learned. And given that even the play-the-right-way Cardinals have made an effort to lighten up this year, I’d say it may even be contagious.

So then, maybe one day Bryant can find a way to step into the “face” role with the support of the Cubs, but it won’t be without an uphill battle. Hopefully, he can eventually rise to that status, because that wouldn’t just be good for the Cubs, it would be good for the entire sport.