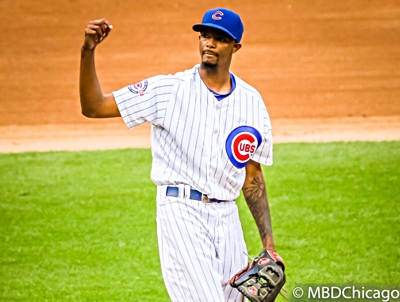 Almost every comeback win features a lesser-told story: the pitching that holds the line. Sure, the offense is needed to do that actual coming back, but if the pitching (and defense) can’t keep the other team in check for the rest of the game, it’s not going to matter what the offense does.

So it was yesterday with the Cubs’ pitching after the Cardinals put up a three spot in the first inning, and already had an 83.1 percent win expectancy. Three runs may not seem like an enormous deficit that early in the game – and, hey, it isn’t to these Cubs – but it usually does mean that the team scoring those runs is going to win. To put it in context, the Cardinals actually had a slightly better chance of winning down two runs in the 9th inning after Kolten Wong reached base than the Cubs had after the first inning.

That is all to say: things didn’t look so good after that first inning, and if the Cubs were going to have any chance of coming back, they’d need the pitching to lock things down. Starter John Lackey did his part, allowing just one more run over the next five innings, and turning it over to the bullpen for the final three frames.

Hector Rondon made his season debut following Lackey’s departure, pitching a clean 7th inning with a two-run lead. We’ve been wondering how Rondon would be used after his rough spring, rough WBC, and rough post-injury 2016, but yesterday certainly wasn’t a low-leverage, “middle” inning. Moreover, Rondon was coming in to face a pinch hitter, and then the top of the Cardinals’ order. The placement of that appearance alone suggests Joe Maddon does still want to work Rondon into the late-inning mix, and thankfully he had a successful first outing. He struck out Stephen Piscotty with a couple nasty pitches, and then got two fly outs (both at 90mph off the bat) by Dexter Fowler and Aledmys Diaz.

Rondon threw just seven pitches, but only one of them was up (which had been the issue for Rondon, especially in the WBC and the spring), and it was way up out of the zone. Everything else was lower third. Another good sign. Just as I would tell you not to freak if he had one bad outing, I will also tell you not to assume everything is fine and dandy just yet. But this outing should provide some confidence, which is probably also going to help.

Pedro Strop followed Rondon in the 8th inning, netting one out, but allowing two runners to reach (walk, and then an error of his own at first base).

Joe Maddon then turned over that mess to Carl Edwards Jr., who was fantastic. He overwhelmed Randal Grichuk with fastballs to get the second out of the inning, with the tying runners on base. He then went to a full count against Jedd Gyorko after juuuuust barely missing the inside corner with a 2-2 curveball. Then, he and Miguel Montero had the coconuts to go back to the curveball on 3-2, which was executed perfectly, and Gyorko was frozen:

It was as impressive as a two-batter appearance can be, and Michael was right to be inspired to photoshop:

For the next time Carl Edwards escapes a dangerous situation. pic.twitter.com/i6i7lLeCDK

The 9th inning belongs to Wade Davis, who labored with his command a bit, but worked around a leadoff double not to allow any damage. That included a strikeout of Dexter Fowler at the end of an eight-pitch at bat with a nasty cutter down and in.

It was a great day of pitching for the Cubs after that first inning – and even that one could have been a clean inning if not for a Ben Zobrist drop at second base – and that set the stage for the eventual comeback.

Image via @MBDChicago, who is always getting great shots.