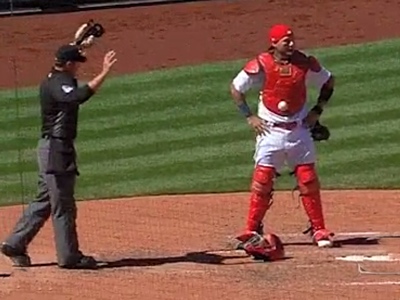 File this under things you’ve never seen before … pic.twitter.com/zgr3eT8HP8

FWIW, I didn't see Molina going to this spot on a rewatch of several at bats. Also looks more like a damaged spot than substance. pic.twitter.com/Do4CfWQ4q6

Here's a weird coincidence. From Elias: The last reigning MVP (Kris Bryant) to start 0-13 or worse at the plate? Ryne Sandberg in 1985.