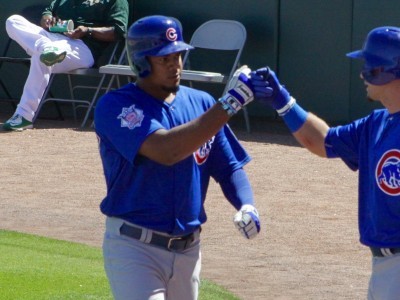 The story this early in the season was supposed to be the full season debut of some notable Cubs’ pitching prospects, but a couple of Iowa sluggers missed that memo. The Cubs Triple A offense is firing in all cylinders right now, and it is thanks in no small part to the home run duel that is shaping up between Ian Happ and Jeimer Candelario.

Both now have two homers, and both are on a ridiculous pace that isn’t worth calculating.

And in the case of Candelario, his early season power surge has come with so many men on base that he is already up to ten runs batted in.

Meanwhile, that early season pitching story is totally a thing. Cubs pitching is doing well up and down the system in the early going, and that includes the bullpens. That’s probably because they don’t have to face Candelario and Happ.

Triple A: Iowa Cubs
Iowa 10, Oklahoma City 9
This was a wild one, but the Cubs held on for their third win.

Double A: Tennessee Smokies
Tennessee 9, Pensacola 2
The Smokies broke the game open with a five run burst in the sixth.

High A: Myrtle Beach Pelicans
Lynchburg 6, Myrtle Beach 1
The Pelicans gave up eight walks on their way to their first loss of the season.