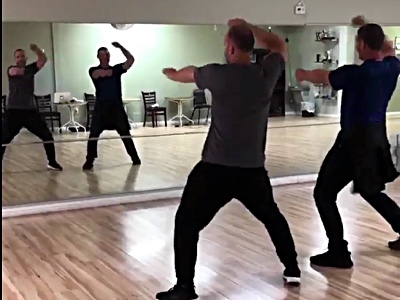 Always a blast when @arizz_44 comes to visit me at work!

David Ross has been competing – very well! – on ABC’s ‘Dancing with the Stars’, and Anthony Rizzo has been a very vocal, occasionally horrified, cheerleader. It only makes sense, then, that Rizzo would drop by to get in on the action.

The real question is whether Rizzo’s efforts will make it into tonight’s broadcast (which takes place at the same time as the home opener, so, with apologies, I’ll have to catch the video later). It’s possible this was just two buddies being pals, and this cell phone video is all we’re going to get. Wouldn’t that be a shame! Especially given that we know Anthony Rizzo can definitely break it down. Note the signature twerk there at the end of Ross’s video.

If you’re looking for a little more substantive Cubs items, make sure you catch up on anything you might have missed from the weekend.