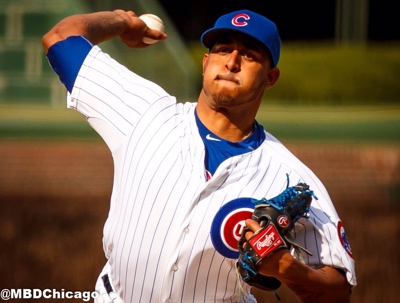 After a late-season arm injury that preceded uncharacteristic struggles, and a pre-season that featured him getting blown up in Spring Training and the WBC, Hector Rondon has been showing so far this year that he’s probably just fine. Although he’s given up an early homer, and walked a couple too many (14.3% BB rate), he’s struck out 6 in just 3.1 innings of work. More importantly, he looks to have better command of his pitches than he did this spring.

So, naturally, he got hurt last night.

On one of those six strikeouts, Rondon bounced a nasty slider off of the ground and then Willson Contreras, who came out to collect the ball and throw to first. Unfortunately, Contreras didn’t get his feet set, threw the ball away, and Rondon was left awkwardly covering the plate when Chase Utley, who’d been on first, came around to score. It’s hard to receive a throw behind you and then spin around to try to tag a runner bearing down on the plate, and Rondon was not able to pull off the feat before Utley reached home, and slid into Rondon. (It was not a dirty slide by any stretch, so let’s not go there.)

You can watch the play here, and see how Rondon twisted a bit upon Utley reaching home.

Rondon was able to walk off the field under his own power, but he was feeling left knee soreness, per the Tribune. Joe Maddon said Rondon would be evaluated further today. Although not always the case, that sometimes suggests the immediate reaction to the injury was not that it was severe, and the parties want to see how it feels in the morning before decided exactly what further evaluation is necessary.

Hopefully a day or two of rest will be all Rondon needs, and, as importantly, hopefully nothing in his mechanics get out of whack because of any lingering discomfort. Even in a bullpen full of late-inning options, Rondon remains one of the best in the game when he’s on.