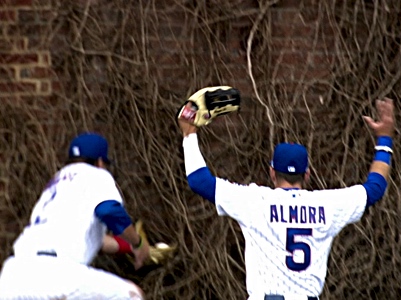 In the third inning today, Kyle Schwarber tracked a ball into the gap in left center near the wall (be careful, Kyle!), and appeared to make a fantastic, juggling circus catch up against the wall.

On review, though, the play was overturned and became a double, as the ball had pushed up against the vines at Wrigley Field before Schwarber had fully corralled the ball:

It was no problem for the Cubs, though. Or I should say, no problem for Albert Almora. Because shortly thereafter, with two outs in the inning and the runner still at second base, Almora robbed Corey Seager again with a fantastic catch:

To be quite clear, that was the SECOND fantastic Almora catch of a Seager drive in just the first three innings of the game!

Albert Almora in a GIF. (Also, this is just today through three innings.) pic.twitter.com/oAUbyCintC