More on the Beautiful Cubs Rings, Using Four Outfielders at a Time, and Other Bullets Skip to content 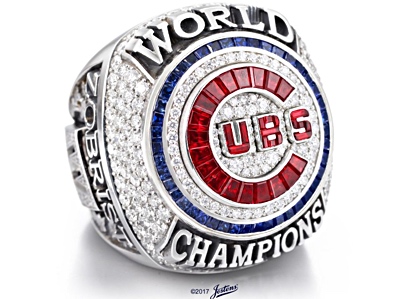 Heard a line on a podcast this week that stuck with me (apologies, but I don’t remember which podcast it was). Maybe it’s cheesy, but since I’m thinking about it a lot, I figure I’d mention it here: we tend to give the advice we need the most.

“The Chicago Cubs World Series Championship Ring, designed and produced by Jostens, is made from 14-karat white gold. Its top features the traditional Cubs bullseye logo, masterfully crafted from 33 custom-cut genuine red rubies that are surrounded by 72 round white diamonds, all within a circular perimeter made up of 46 custom-cut, genuine blue sapphires. The bezel is surrounded by 108 round white diamonds lifting the Cubs logo to victory and signifying the end of a historic 108-year championship drought. Overall, the ring contains 214 diamonds at 5.5 karats, 3 karats of genuine red rubies and 2.5 karats of genuine sapphires.

One side features the player’s name set atop the iconic W Flag, which is created from 31 round white diamonds and a fire blue corundum understone that forms the “W.” Silhouette images of Wrigley Field’s bricks and ivy surround the flag and the player’s number, which sits below the flag.

The other side features the year 2016 above the iconic Wrigley Field façade and Marquee, displaying the message “CUBS WIN!” A silhouette of the World Series Trophy sits below the Marquee with a large round white diamond set in the center, signifying the 2016 World Series victory. Two princess-cut diamonds flank the trophy, representing the team’s two previous World Series titles. Wrigley Field’s bricks complete the background.

On the palm at the bottom of the outer band is the team’s rally cry, “WE NEVER QUIT.” On the inside of the ring is a custom triple arbor that features the local date and time the championship was won – “11-3-16, 12:47 am” – and the series scores and logos of the three teams the Cubs defeated on their epic journey to becoming 2016 World Series Champions. An image of the infamous goat representing a supposed franchise curse is included on the inner band.

…. A total of 1,908 rings and pins will be distributed to Cubs players, coaches, ownership, executives, front office associates, ballpark staff, partners and Hall of Fame alumni, including posthumous rings for the late Ernie Banks and Ron Santo, to be saved in the Wrigley Field archives.”

Sorry, everyone, maybe this photo is a bit better than the one poster earlier. #Cubs Ring Ceremony #FlyTheW #ThatsCub @BleacherNation pic.twitter.com/gObrC5L5sf

Appropriate dress for this casual Friday at the office @BleacherNation pic.twitter.com/Zgm03yTQWF