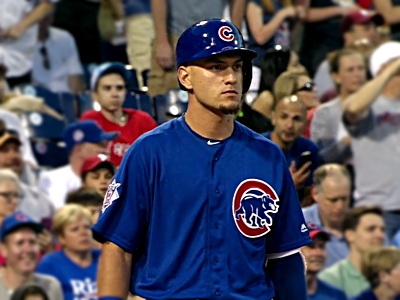 This dude is on fire, eh?

A day after coming through with a huge hit in the Cubs’ comeback win against the Brewers, Albert Almora Jr. got the scoring started against the Brewers (and, um, starting the comeback, since the Cubs already trailed 3-0 at the time).

This time, it came by way of a monster shot to left, which you can watch here at Cubs.com. As Daren Willman points out, that was a serious blast for Almora:

Albert Almora Jr. got into that one… 106.8 MPH and projected at 407ft. Hardest HR he's ever hit. pic.twitter.com/gQ7ds1toAS

After the blast, Almora pushed his slash line up to a team best (and very clean-looking) .450/.500/.700. That, of course, is just 23 plate appearances, but so far, Almora’s made the most of the time he’s been given, not only at the plate, but also in the field.

And the Cubs are having some fun with it: