Report: Cubs "Got Nowhere" in Extension Talks with Their Young Stars, Including Kris Bryant Skip to content 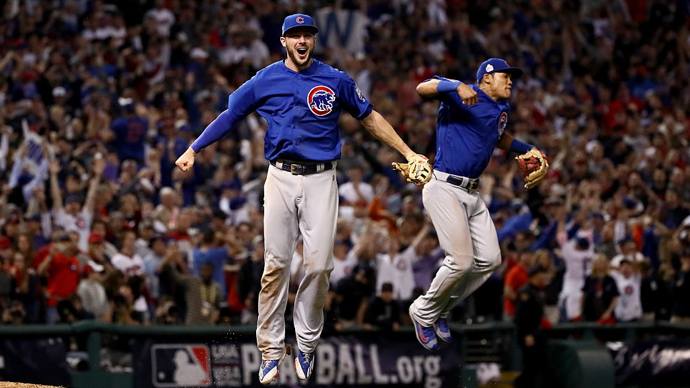 All offseason, we dutifully tracked the many extensions inked by young talent around baseball, carefully considering the market implications for a team like the Chicago Cubs, which undoubtedly wants to do the same with much of their young, talented core.

No deals were announced – and no serious rumors leaked, either, as the front office has been very good about keeping in-house negotiations in house – and we moved on to the season.

If you were looking for a little background, though, Tom Verducci has it for you: “The Chicago Cubs made runs at extending several of their young players this winter, including third baseman Kris Bryant, but according to one source, every one of those efforts ‘got nowhere.'”

A number of reactions stir in my upon reading that:

1.) Good to hear that the Cubs were being proactive about extension talks with their talented young core, even though most are still at least a year or two away from arbitration (and many, many years away from free agency);

2.) It’s modestly disheartening to hear that, uniformly, those talks “got nowhere”;

3.) It’s wholly unsurprising that the talks “got nowhere” with Bryant, in particular, given his uniquely valuable position and comfortable earnings already; and

4.) Hey, there’s still plenty of time to get to extensions before these guys all blow up in arbitration and/or depart in free agency.

Consider that, by its very nature, the arbitration process stirs negotiation. So it was always going to be the case that, whatever happened in the pre-arbitration years with these guys, talks will continue.

But will any deals get done?

I’d be shocked if the Cubs weren’t able to work out extensions for at least some of their young talent covering some arbitration and free agency years. Still, when you go through the players case-by-case – Bryant, Kyle Schwarber, Addison Russell, Javy Baez, Willson Contreras, Kyle Hendricks, Albert Almora Jr. – you can easily make an argument that each one is best served raising his stock for just one or two more years before seriously considering a long-term deal. They could also be looking at their teammate, Anthony Rizzo, whose pre-arbitration extension is now one of the most team-friendly deals in the sport.

Of course, the counter to all of that is what it always is with pre-arbitration extensions: nothing is guaranteed in the future, and locking down life-changing money when you have a chance – even at the cost of potential future earnings – is always worth considering.

Verducci’s great piece includes much more on the topic of extending young talent, and the challenge the post-2018 free agent class presents: guys like Bryce Harper and Manny Machado are about to totally reset the free agent market (many believe), and thus how do young players like Bryant or Russell properly value their future free agent years? You can understand that they may be even more inclined to wait just a couple more years before seriously considering an extension.

Scott Boras represents both of those guys, and here’s what he told Verducci about negotiating with Cubs President Theo Epstein: “Theo does not settle on certain things. He offers a very limited range. You’ve got to give up an option year, a free agent year and he can move you whenever he wants to move you.”

In fairness there, while I understand Boras advocating that his clients try not to lose the free agent years or try to get a no-trade clause, all teams will try to extract some future value in exchange for the present guarantee they are giving up. After all, until a player signs that first long-term deal – an extension or in free agency – they are always going year-to-year, and, in theory, could lose their security at any time.

This isn’t the last we’ll hear on this topic, as the front office has shown a willingness to engage in and lock down extensions even during the season. It’s more likely, though, that this will come to a head next offseason, as the young positional talent – starting with Bryant and Russell – starts hitting arbitration.