Kyle Schwarber Made One Incredible Play, One Less So (VIDEOS) Skip to content 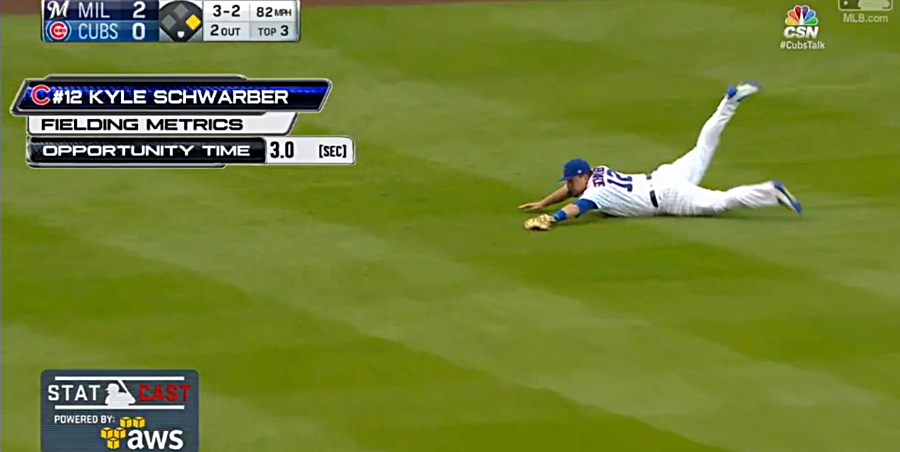 It was an adventurous day at Wrigley Field for the pitchers and defenders, with 20ish mph winds and game temperatures into the 30s when account for wind chill. Perhaps the strongest example of just how rough the conditions were was a pop up Kyle Schwarber dropped in the 6th inning, immediately before the game went into a two-hour rain delay.

I’m seeing a lot of hostility toward Schwarber for the play:

The reason that video is so grainy and unclear is because it was pouring rain, with driving wind. You see how poorly Javy Baez tracked that ball, and it got to the point where Schwarber, who was simply trying to back it up, was suddenly having to sprint to try to catch it.

Should Schwarber have caught it? Sure. Was that an easy pop all things considered? No way. Again, watch Baez on the play to see what the ball was doing! Look where Baez thought he was camping under it, and then where the ball wound up!

The flip to second by Schwarber? Yeah, that was bad. Maybe not even a bad decision, but definitely bad execution. I think you’ve just gotta cut everyone a break on that play. Did you see the ball Keon Broxton flat out dropped in center field earlier in the game because of the wind? There wasn’t even apocalyptic rain then.

And, hey, the other reason you’ve gotta cut Schwarber a little break is because he also made a fantastic catch earlier in the game:

Strong as an ox and nimble as a cat. pic.twitter.com/WpY5xQag5H

Per Statcast, that ball had a mere 26% catch probability off the bat. It is typically not caught. But Schwarber reacted quickly, and timed his layout properly. It may not have been the most graceful maneuver, but he made a great play on a really tough ball.