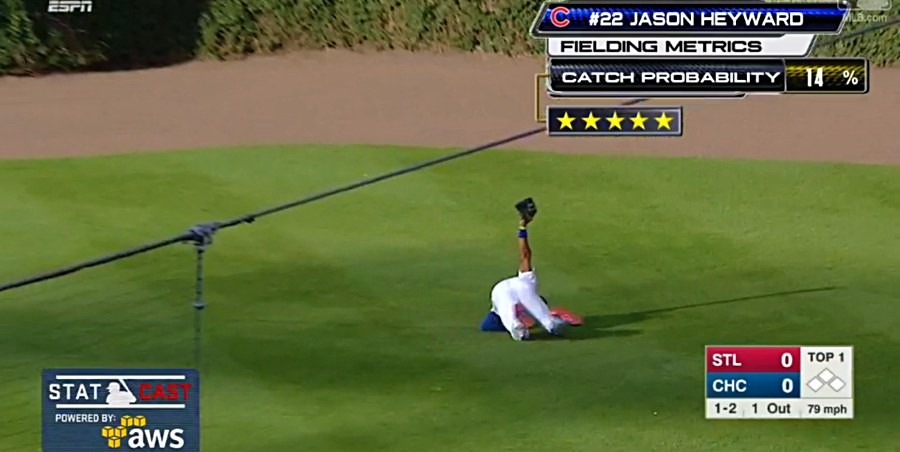 It seems like the Cubs have been playing better defense lately, doesn’t it?

I’m not sure if that’s just because there’s been an uptick in flashy plays, or if there really has been some stabilization of the skill set. The advanced metrics aren’t going to be helpful in a small sample, unless of course you believe that Kyle Schwarber really is a better defender in left field than Albert Almora is in center or Javy Baez is at second.

If you did look at that UZR/150 list, though, you would note with a chuckle that the same Cubs player shows up in the top two spots: Jason Heyward in center field, and Jason Heyward in right field. Not that you need a small sample defensive metric to tell you that Heyward is very good out there.

And not that you need a particular highlight to show you, either, but he sure had a great one last night in the first inning:

Based on the ball’s trajectory, velocity, location, etc., that’s a ball that’s expected to be caught just 14% of the time. Of course, Heyward being the defensive stud that he is, you’d expect him to be among the outfielders with a chance to live into that 14%.

I think even that number doesn’t do the play total justice. Not only was it harder than it looked because Heyward had to backhand the ball, but it was also harder than it looked because of the way the sun comes through the grandstand into right field at the time of day. We can’t say for sure whether it was bothering him on that particular play, but based on the look of things, it was a factor.

If Heyward doesn’t come up with that one, who knows how the inning plays out, let alone the ones that followed, with Kyle Hendricks not having his best night.

That continues to be the impact of Heyward’s defense out there, preventing and limiting damage in ways we can’t fully know.