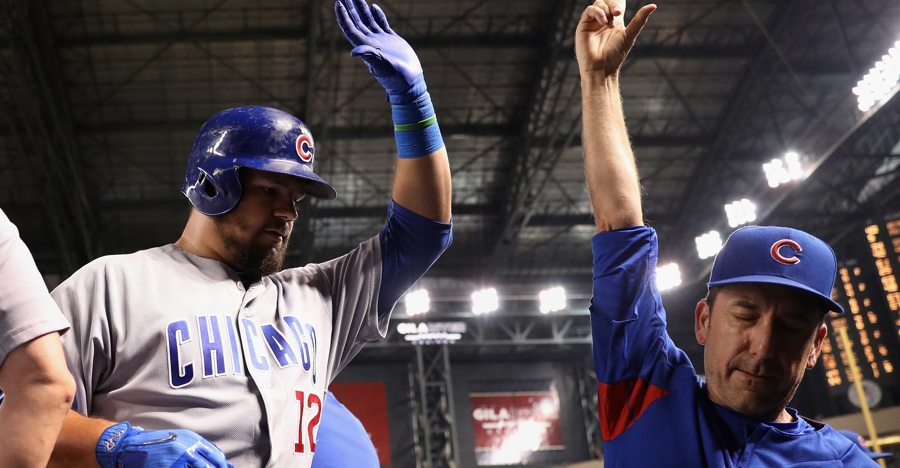 With Willson Contreras out for a month or more, the Cubs are going to need to get significant offensive contributions from elsewhere in the lineup, given that Contreras had been one of the best bats in baseball over the past month.

To that end, a couple guys you might immediately think of as the good fits in that regard are Kyle Schwarber and Alex Avila. The former was expected to be the guy Contreras became, the third monster bat to join with Kris Bryant and Anthony Rizzo, steadily pacing the offense. And the latter is quite literally replacing Contreras, for now, as the nominal starting catcher, and one who, himself, carries significant offensive potential.

So it was especially heartening to see that particular duo rock a couple long ones back-to-back last night. The Cubs are going to need this (via @CSNCubs):

Redemption in The Desert! #Cubs pic.twitter.com/it7gNRlAk2

Avila follows up Schwarber’s homer with a solo shot of his own. #Cubs back up by 3!

Fun and instructive aside: both homers came on 1-2 pitches that didn’t do what they were supposed to do, and neither batter took a “B” hack. It’s easy to criticize when a guy whiffs on a two-strike pitch because he was using his normal swing, but we’ve said it before: not ever batter can be Anthony Rizzo, and still hit effectively choking up the way he does. Some guys are, in total value, just better off being their normal selves with two strikes, even if it means fewer balls in play. Because it can also mean two strike bombs.

And those were both bombs: the two homers were *the* longest homers in baseball yesterday, according to ESPN’s Home Run Tracker, registering at 452 (Schwarber) and 450 (Avila) feet.

As for Avila, he’s hitting .182/.357/.727 in his short time with the Cubs thanks to two early homers. He was in quite a slump before the trade, so hopefully the change of scenery and playoff situation, plus the opportunity to now play regularly, will help him continue to be the guy he was in the first half with the Tigers.

If these two guys keep hitting, the Cubs’ offense could be more than fine, even for the period of time Contreras is out.

In conclusion, can I get an amen: