Happy Anniversary to the Cubs, Happy Birthday to The Littlest Girl, and a Great Deal of META Skip to content 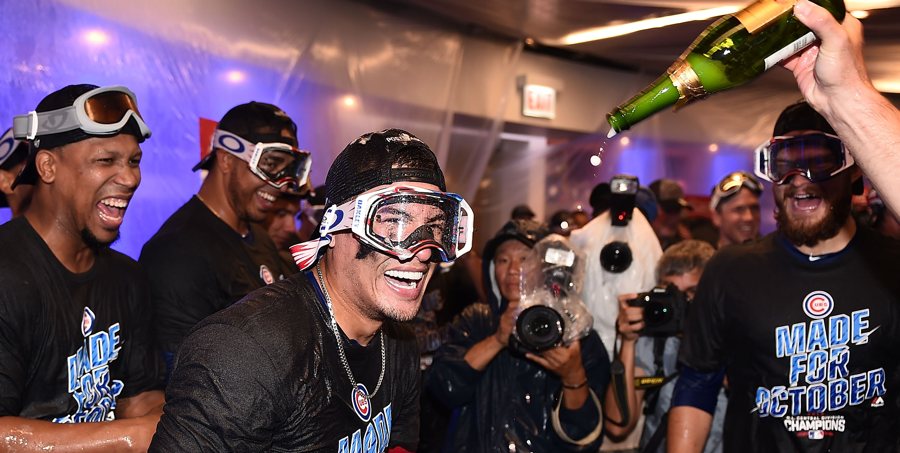 The way I remember it, I wasn’t checking my phone that often.

On September 15 of last year, The Wife and I headed to the hospital for the birth of our third kiddo. After resolving some confusion at a locked entrance (“Who are you here to see?” … “Um, our baby?”), we settled in for the labor process, which has always been a long one for us. Well, I say things like “we” and “us,” but of course I mean Gretchen, which is The Wife’s actual name, by the way. I started calling her “The Wife” here so many years ago as a nod to preserving some vestige of familial privacy, but I’m thinking that went away about the time I told you all about my disastrous vasectomy complications.

As I was saying, we settled in for the labor process late at night, right at the same time the Cardinals were losing 6-2 to the Giants out on the West Coast. That was of note, because it meant that, while I did my best to support Gretchen in whatever way I could, the Cubs were clinching their first NL Central title in eight years.

I probably looked at my phone four or five times. Tops. Maybe fired off a tweet or two.

The Littlest Girl, Lucy, arrived that next morning, and the Cubs celebrated by walking off on the Brewers that day, and having their NL-central-clinching champagne showers in the clubhouse. My offers to douse Gretchen and Lucy in celebratory Coke Zero were politely declined.

That was also the game the front office was not-so-secretly celebrating in the bleachers:

Theo may have the mustache but Jed might be the happiest person in the bleachers! @BleacherNation @Michael_Cerami pic.twitter.com/r4F94tvZ8J

That was a fun, fun day.

Today, then, I say Happy Anniversary to the Cubs. Last year, on this day, they took the first step in a postseason journey that would, at long last, take us all to a place we were so desperate to finally go.

Lucy was four months old when we first started to have concerns about her development. She was a delightful baby – almost too easy – but she wasn’t doing the things you’d expect a four-month-old to be doing.

I feel fortunate that we had two older children who developed typically so that we were diligent very early on with Lucy’s development. The delays became significant. We monitored closely, we sought help, we considered options, and we proceeded as advised by doctors and our own instincts over these past eight months that followed.

To that end, Lucy gets therapy two and a half times per week, and visits with a wide range of doctors have become typical for us. Children develop unevenly and at different rates, and you will, by nature, cling to the hope that a delay is only a delay, that the progress gap can be closed by hard work over a long enough period of time. And, moreover, until you have a diagnosis – the specific thing that tells you what’s wrong and hints at what’s coming – you live in a perpetual state of purgatory, hopeful for what could possibly be, all the while knowing something is not right. For our family, right now, we are in the process of ruling out underlying issues, and sometimes I feel like we’re in a cycle of having one big, bad thing ruled out, only to be subjected to tests for the next big, bad thing.

My relationship to what we’re going through with Lucy is among the least important aspects of this process, but it’s the one that affects me here, at BN, the most often. That means in logistical ways, but also in emotional ones. Sure, I’m just a dude who writes about the Cubs, but I have always felt that very real sense of community here, even among the many of you who do not comment or do not directly interact on social media. I know you’re reading. I feel, daily, like I’m speaking with you. It is communion.

So it’s been very hard – in addition to everything else – not to say anything about what’s going on in our lives. The truth is, there was no singular reason that I never said anything. Just the confluence of underlying layers that held me back – our family’s privacy, our lack of knowledge (to this day) about what’s actually going on, a sense of what’s a burden or a benefit to the reader, and my own reluctance to put into print the things I’m feeling. The things I’m fearing. Lucy may very well read this some day, and I don’t want her to think that this is the sum of our experience together.

But I have reached the point in my own process that I can’t keep eliding past the things that are going on in my life that inform what I do here at BN. There’s always been something a little more personal in the way we speak together about the sport we love, and it’s not fair to you or me to hide certain fundamental truths behind a wall. Even if only for myself, I will feel better when I click ‘publish’ on this post.

Today isn’t only the anniversary of last year’s fun Cubs experience, it is also Lucy’s first birthday. She is sweet and funny and playful, and I can’t fully articulate the richness she’s brought to my life. Lucy is not her limitations. She’s a wonderful little girl. She’s my Littlest Girl.

I will keep loving her deeply, supporting her fully, and doing everything I can to make sure that she – like her brother, sister, and mother – remains the sun that I orbit.

And for you, I will keep doing what I do here, because that, too, is something that I love.