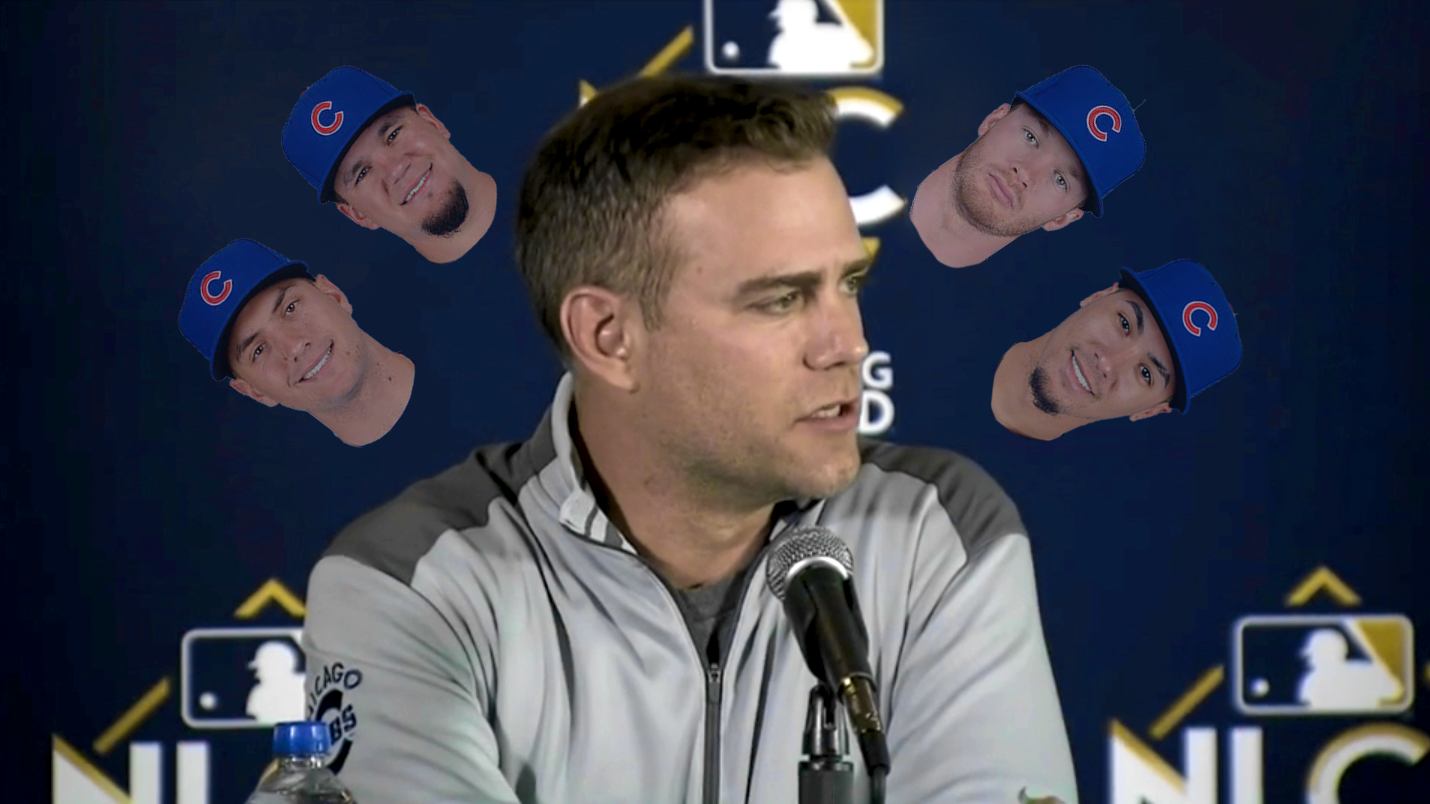 A day after the Cubs were kicked out of World Series contention by the Los Angeles Dodgers, President Theo Epstein addressed the media in an exit interview (of sorts) from Wrigley Field.

Brett got into the broad strokes over the weekend, and you can check out some detailed Q&A stuff from that session right here at the Athletic, as well as some other highlights/commentary over at NBC Sports Chicago, but there’s one question/answer I want to discuss in isolation:

As I’m sure you can guess, that “Um, probably” was joined by a hefty explanation and plenty of context, including the obligatory caution that nothing is guaranteed (all of which you can see here), but the point remains: the Cubs could move some Major League talent as soon as this winter, and will probably need to if they’re hoping to pick up other big league pieces in return.

Now, if you’re wondering what’s so special about those comments, it’s that, in the past, Epstein’s answer might’ve gone something like this: We’re still in talent acquisition mode, and we’re not quite in a position to start subtracting from the Major League squad just yet. Redundancy is good.

Since the days of that response, however, the Cubs have emptied their Minor League cupboard of tip-top prospects (by way of trades and promotions), and have new, significant holes elsewhere on the roster. Indeed, 40% of their rotation is exiting via free agency (John Lackey and Jake Arrieta), while two huge bullpen contributors (Wade Davis, Brian Duensing) are set to be free agents as well.

And in the meantime, the group of position players is flush with youngsters/permanent forces:

But despite how much we’d all love to see this sort of defensive alignment, I doubt the Cubs will leave a combined $37.5 million on the bench in the form of Jason Heyward and Ben Zobrist in 2018. So if either/both of those two will see some significant playing time, there is quality depth to move and a compelling reason to move it. (And I didn’t even mention Tommy La Stella, who hit .288/.389/.472 (126 wRC+) in part-time duty this year.)

But here’s the problem: even if we come to terms with the fact that the Cubs will move one of those nine youngsters, it’s not easy to figure out whom it may be.

In my opinion, the only three truly untouchable guys are Anthony Rizzo, Kris Bryant, and Willson Contreras. I’ll eat my hat if any of those three are playing on a different team in 2018. [Brett: And I will eat Michael’s shorts.]

Everyone else, however – Addison Russell, Javy Baez, Kyle Schwarber, Albert Almora, and Ian Happ – could reasonably be considered not-off-limits this offseason. There are obviously varying degrees of value in those five names – not only on-field, but also from this front office – but yes, if the right deal came along for one of those guys, I wouldn’t necessarily be surprised (but I would be bummed) to see them moved. (You could argue that Russell should be in a tier by himself, just slightly ahead of this group and behind the first three. I get the sense that the Cubs prefer his steady glove and offensive floor at shortstop over Baez’s, his presumed replacement.)

The Cubs would trade from that group only where they felt their positional redundancy was starting to leave value on the table, and the return they could net will significantly help somewhere else on the roster. The front office saw that opportunity last year when they swapped Jorge Soler for Wade Davis, and it might happen again this year.

I’ll leave the discussion here for now, because the transactional side of the offseason isn’t even officially underway yet. But be ready, because a roster shakeup could be coming this winter and it could include some prominent young names.

Speaking of which, make sure you keep up with the latest rumors this offseason by following BN on Twitter, and liking us on Facebook: