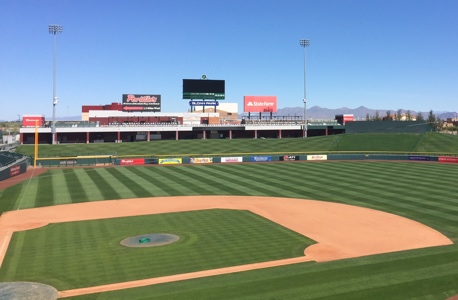 It’s mid-November, and baseball is starting to fade from your memory. The Cubs did … something … in 2017, but you can’t quite remember what. I think they did pretty well. Yeah. They won a playoff series, I think, and then the season ended.

And with that fogginess encroaching upon the bases recesses of your mind, it’s the perfect time to start dreaming about SPRING TRAINING 2018!

So, today, the Cubs released their initial Spring Training schedule:

The initial Cubs 2018 Spring Training schedule is OUT: pic.twitter.com/x0Y2TUfjbv

As you can see, the Cubs open up their Cactus League slate on February 23, a couple days earlier than they opened up last year (woo hoo!). The home opener at Sloan is the next day, Saturday February 24 against the Rangers. That’s only about three months away. YOU CAN DO IT.

There are 34 games on the schedule right now, though more will very likely be added later – it’s going to be a very full slate. The Cubs will host 16 of those games, go on the road for 16, and then will play their annual two-gamer in Las Vegas on March 17-18 against the Indians.

Individual game tickets for home games will go on sale Saturday, January 6 at 11 a.m. CT at the Sloan Park ticket office, on www.cubs.com or by calling 1-800-THE-CUBS, per a Cubs release. For season ticket and group ticket information please visit www.sloanpark.com or call 1-800-THE-CUBS.