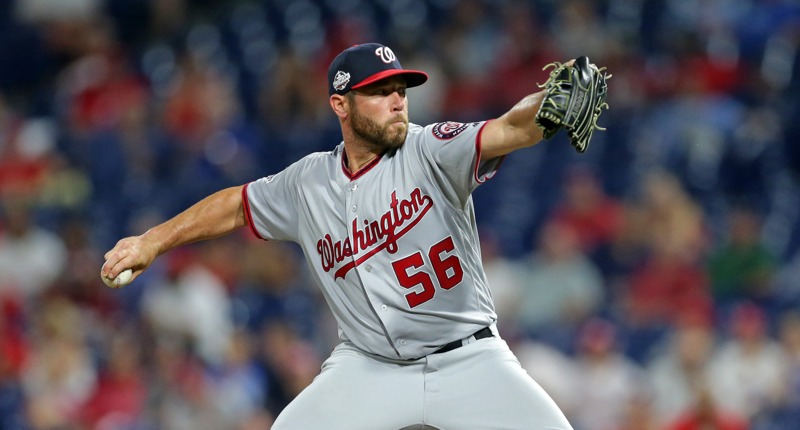 Yup. I know. Your socks are still on your feet.

But in a deep reliever pool, and with the Cubs apparently loath to spend deep into the highest luxury tax tier, you should have always expected them to look for a bargain or two. Sure, we thought perhaps it would be a bargain or two in addition to a high-leverage, back-end type, but the market has precious few of those left, and it doesn’t look like that’ll be a focus for the Cubs unless they move a contract or two.

We’ve already heard of a couple lesser names in whom the Cubs may be interested (Jake Diekman and Brad Brach), but perhaps there’s one more to add to the list. Well, for discussion purposes, at least.

In a write-up at MLB.com, Richard Justice pegs landing spots for seven of the bigger name remaining relievers, and he sends righty Greg Holland to the Cubs (or A’s).

Holland, 33, is coming off an utterly disastrous year, which saw him decline a qualifying offer, sign with the Cardinals just before the season began, pitch atrociously, deal with injury issues, and wind up with the Nationals to finish the season.

On the plus side, you could argue that Holland’s terrible stint with the Cardinals was driven by a wonked out offseason and Spring Training, then by the pressure to adjust and compete quickly, then by a hip injury. Once he wound up with the Nationals for the final two months, he put up a 0.84 ERA and 2.97 FIP over 24 appearances. He got plenty of ground balls (48.8%), didn’t give up hard contact (27.3%), and was solid on the K/BB front (31.3% K rate, 12.5% BB rate). Even his full year FIP (3.83) wound up 5% better than league average.

On the negative side, we were already wary of Holland last year, seeing his first post-Tommy John season in Colorado as a lot less successful than the superficial numbers made it look. He wasn’t bad, mind you, he just probably wasn’t a really tremendous back-end option for the full season.

Holland is not old for a reliever, and he’s got a long track record of high-level success before the surgery. Even granting the two bad half-seasons in the last two years, he’s of course a guy worth of a big league deal to join your bullpen mix. I can’t get too excited about the prospect of him – for example – filling in as the Cubs’ closer while they await Brandon Morrow’s hoped-for health, but I could see being reasonably contented about the Cubs adding Holland to their bullpen on a very modest deal.

Good bullpens often wind up built with guys like Holland – you just have to get a lot of them in the door, and sort out very early in the season which guys have it, and which guys don’t.