It has long been clear that the Cubs – whether by virtue of reduced revenues, an overly-intrusive budget, an unwillingness to sign another massive contract, or a combination of all of those things – would not be able to add a Bryce Harper-caliber player in free agency this offseason without first moving out significant salary. It sucks. We have unanswered questions about revenues and the status of the TV deal. But this is just the reality.

Are things even worse than that, though?

Today, Ken Rosenthal reports, per big league sources, that the Cubs would need to unload some payroll to sign even a relatively cheap reliever. The example Rosenthal gives is former Cub Adam Warren, who was projected by Jon Heyman and his expert to get about $5-$6 million per year on a two to three-year deal back in November.

To be sure, I always would have thought the Cubs would be value-conscious in the bullpen if they didn’t land a top arm like Zach Britton or Andrew Miller, but I definitely did *not* believe they had to move salary just to sign a $5 million contract. In that world, it would suddenly be true that the Cubs “could not afford” to re-sign reliever Jesse Chavez to the two-year, $8 million deal he received very early in the offseason from the Rangers. That storyline has been referenced frequently by the writers at The Athletic, and although it rang dubious early in the offseason, you’d be crazy not to wonder at this point.

This weekend, in an interview on The Score, Theo Epstein emphasized that the Cubs are not being guided in their efforts this offseason by staying under the luxury tax, which was already more or less obvious, since the Cubs are likely to be $20 million over the luxury tax even if they do not make another move. Instead, Epstein suggested that the front office is being guided by more typical budgeting guidance – you can’t spend what you don’t have. That kind of thing.

Would a thoughtful organization, in the middle of this competitive window, in a division that has improved as much as it has, really handcuff the front office so badly that they have to pinch pennies to improve one of the most glaring risks on the roster? We’re not talking about allocating an extra $30 million for the bullpen here. If the front office identified a great relief target that they really wanted for $5 million, I find it unfathomably unacceptable that the money could not be sourced to make that happen without having to freaking trade away Ben Zobrist to do it (something Rosenthal mentions, and has been discussed previously as a possibility on the rumor circuit).

It’s not as if another $5 million for the bullpen would push the Cubs over the top tier of the luxury tax. Here’s your updated chart: 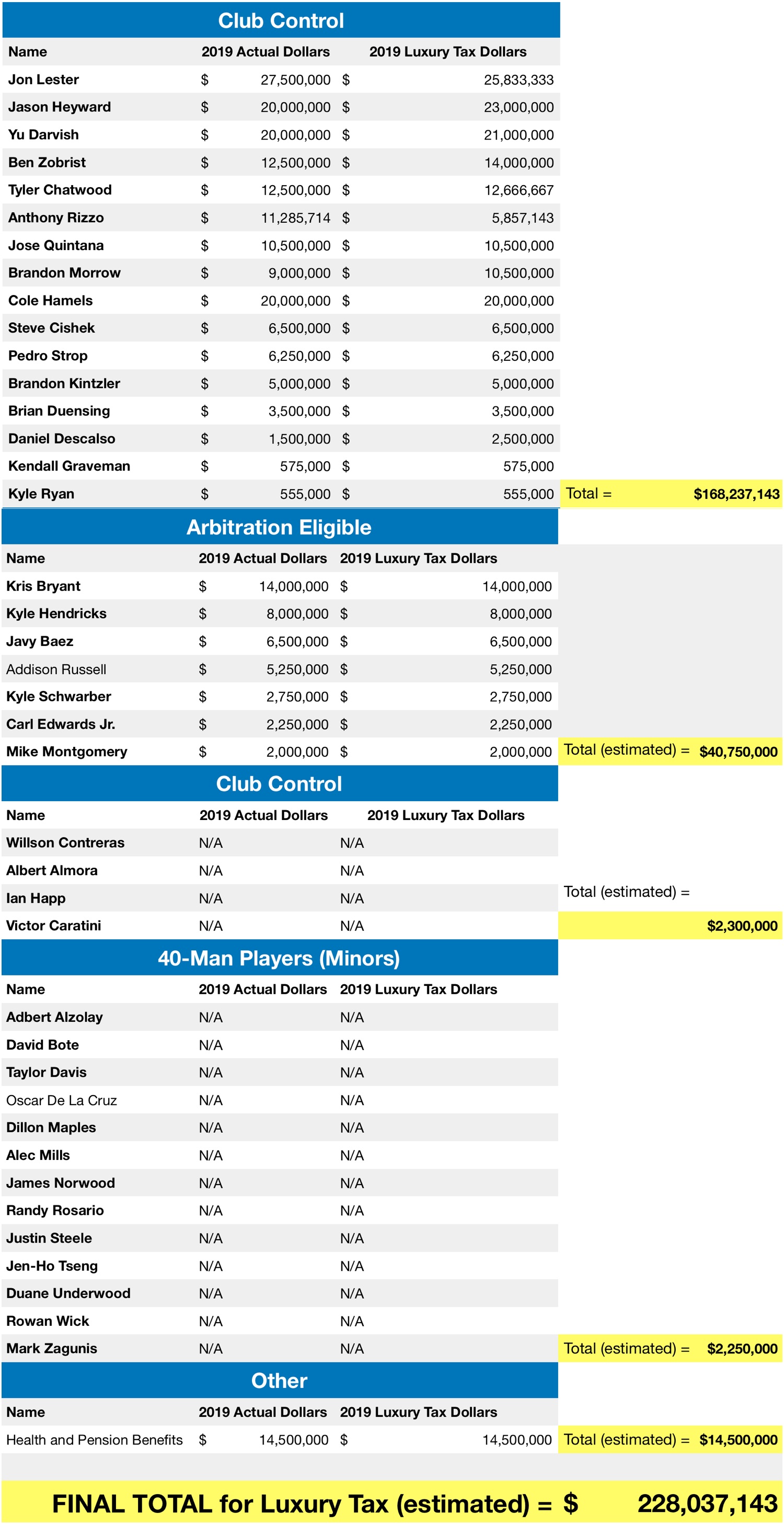 I’m prepared to hear arguments that going over the top tier of the luxury tax, in addition to bumping back your top draft pick 10 spots, brings along with it idiosyncratic penalties that I’m not privy to. Various covenants with partners and banks, for example. It’s quite possible.

But not spending up to that level if it helps the team at this critical time? I can’t wrap my head around it, when the consequence is merely a little more money. Moreover, since the worst of the financial costs of being over the luxury tax don’t arrive until you’ve been over the luxury tax for many years in a row, it’s worth pointing out that the Cubs have some $60 million coming off the books after this season (and they could make it even more if they swapped two years of Tyler Chatwood for one year of Russell Martin). Again, maybe the multi-year thing makes a contract like Bryce Harper impossible without moving out another contract, but a short-term bullpen deal? What’s the holdup?

Other questions people will no doubt have if money is THIS tight: why pick up the Cole Hamels option at $20 million? Why tender Addison Russell a contract at all? There are answers, to be sure. The rotation without Hamels does make me nervous and the Cubs may not have wanted to risk losing him (that decision also could have come before the front office got their budget – we don’t know about that part). The Cubs likely wanted to retain the chance of trading Russell, and/or reserving middle infield depth when they have very little that can handle shortstop at the big league level. I can understand the decisions at those levels. But from a money-is-so-freaking-tight perspective? I now have more questions than answers.

In the end, we’re still in this un-fun place: sure, maybe this is all BS and the front office is just playing the most successful game of possum in the Twitter era of sports rumors, but it’s far more likely that the budget they received in November left them in a position where almost no meaningful changes to the roster could be made through free agency. At least not without first trading away a ton of salary, which seems incredibly difficult given the possible trade options aren’t exactly on attractive contracts for trade partners or are guys you wouldn’t want to trade anyway, regardless of payroll.

Even if we set aside dreams of Harper, and think more realistically about the needs in the bullpen … I guess we just have to hope some great bargains fall to the Cubs late in the winter thanks to a crowded market.