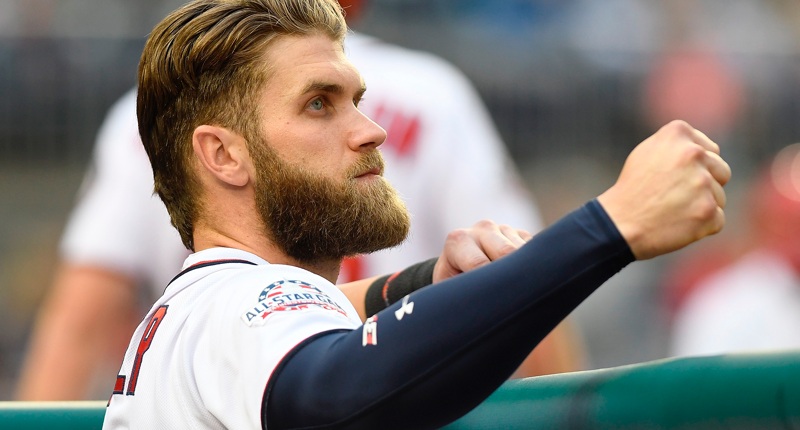 Although it feels like nothing’s changed on the Bryce Harper front lately, there actually have been some plot-driving moments here over the past few weeks, and another is kicking in this week.

The latest comes out of Philadelphia, where Bob Nightengale is reporting an important step forward for the Phillies: actually meeting, in full force, with Bryce Harper.

This Saturday, the Phillies front office, as well as owner John Middleton, will reportedly fly to Harper’s hometown, Las Vegas, to meet with the slugger and his agent, Scott Boras. Despite the noisy rumors all offseason, this’ll actually be the team’s first meeting with Harper physically present – apparently, the Phillies’ GM met with Boras during the Winter Meetings, but Harper wasn’t there.

Altogether, this means Harper will have officially met with the White Sox (in Vegas at the Winter Meetings), Dodgers (in Los Angeles at Scott Boras’ office), Phillies (in Vegas this Saturday) and the Nationals (in D.C, some time before the season ended, probably). Beyond that, we know the Cubs front office met with Boras for at least three hours at the Winter Meetings, but it appears they didn’t yet meet with the slugger, himself. Which, well, you know.

So why now? Is anything special about this week? No, not particularly so – after all, things have to start moving eventually. But I can’t say I see no connection or driving force. The Phillies, you’ll recall, are also well-known suitors of Manny Machado, and things have been heating up on that front lately, too. Just last night, for example, the White Sox signed outfielder, and good friend of Machado, Jon Jay, who, along with Yonder Alonso, whom the White Sox acquired earlier this winter, are somewhat of a best-friend threesome. It’s not too difficult to imagine the Phillies knowing something we don’t – or simply seeing the writing on the wall (be it about the White Sox or about the Yankees) – and moving on with their offseason accordingly. They still have all that “stupid” money to spend, remember?

And that’s not all. The Phillies might have always planned to move closer to Harper, but have felt some additional pressure over the last few weeks thanks to the moves/signals out of Los Angeles and Washington. The Dodgers, you’ll recall, cleared salary and roster space in a two-starting-outfielder trade with the Reds. There’s still a belief out there that it had as much to do with clearing space for J.T. Realmuto or Corey Kluber as it did Harper, but it’s hard not to connect the dots.

We also just learned that the Nationals had another meeting with Harper’s camp just before Christmas (in other words after he rejected their initial offer and they made many other, big signings), which could be a bit of market-mover. There were, of course, some loose rumors that the Nationals had extended Harper a new offer worth “much more than the $300M being reported by the media,” but it wasn’t exactly concrete. And, of course, we know the Nationals like to defer big swaths of money in these sort of deals (their first $300M offer to Harper was actually reportedly worth something closer to $280M), so who knows what that quote actually means. Despite the cloudiness, we can comfortably say the Nationals are not out.

As for the Cubs, well, it’s not good news that the Phillies, Nationals, and Dodgers have all taken a step forward in recent weeks, and Machado to the White Sox wouldn’t necessarily help the situation. Your rooting interest is probably for Machado to pick the Phillies, because they are otherwise quite serious about Harper, and the White Sox still feel like a stretch to land Harper. Moreover, if the Sox sign Machado, the Phillies will only feel more pressure to pounce on Harper.

Then again, if the Cubs need to move money out to sign a low-tier reliever, maybe we’re bending our brains for nothing. Given that Theo Epstein asked Boras not to sign Harper away before circling back, I tend to doubt that, but it’s getting tougher every day.