#CubsCon Winds Down, Instructional Ball Underway, and Other Bullets Skip to content 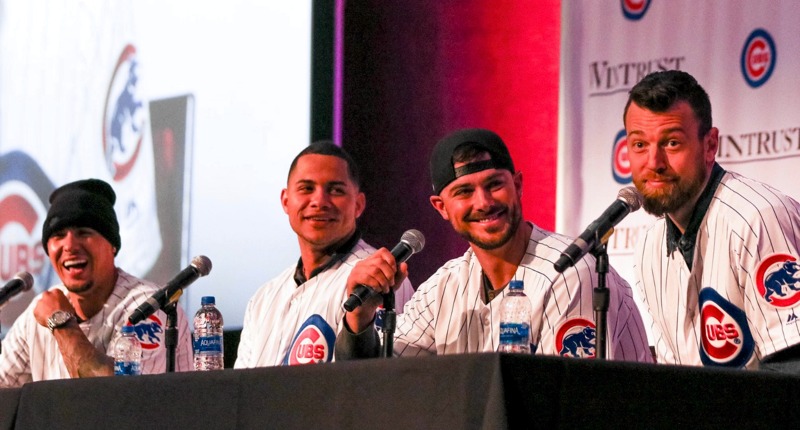 [NOTE: We are having problems with our commenting system right now, and I’m working to get it back up and running. Sorry about that.]

Cubs Convention is in its final day, and although it has been light on any truly groundbreaking news, I think the biggest takeaway is going to be the overall vibe, which was much lighter and more positive than many were expecting. To be sure, the fans who pay to come to a fan convention (through the snow) are necessarily more likely, as a group, to skew positive. Still, I was a heartening feeling. Don’t get me wrong, the energy wasn’t quite what it was a few years ago, but it certainly was far from funereal.

Also: the players, themselves, are a pretty clearly feeling good. That may not mean everything when the bell rings, but the positivity, readiness, and high expectations have been very clear. As much as we may not like to hear in January about “internal improvements” being the most important way for the Cubs to succeed in 2019, it’s undoubtedly true. And the Cubs have a heckuva lot of talent.

IT’S NOT AS EASY AS IT LOOKS, OKAY? pic.twitter.com/am5k1VTkF7

#Cubs fans missed their 1st baseman at the Kids Only Press Conference, presented by @advocatehealth. @ARizzo44 “I just got off a 16.5hr flight, just walked in the door.” @KrisBryant_23 “Yea, you look it. You look awful.” “Just kidding, you look handsome buddy.” #CubsCon2019 pic.twitter.com/Nj6B5ndGRJ

Kris Bryant admits it has been difficult to answer for #Cubs teammate Addison Russell after Russell's personal wrongdoing. Bryant believes Russell needs to address the topic soon. "The only person that should answer those questions is him," Bryant says.https://t.co/bgNUth5Mlz pic.twitter.com/A79YfyxYde

AZ Phil has some details on the Cubs’ instructs program here. Love to hear this about Hoerner and especially Jared Young. https://t.co/AUO0I5SPDy pic.twitter.com/KCt35iObXk

It’s kinda cool that Instructs has been moved from Sept to Jan. Cooler weather and an early start to #SpringTraining. #cubs 2018 No.1 pick @nico_hoerner pic.twitter.com/BB4oOu0YHm