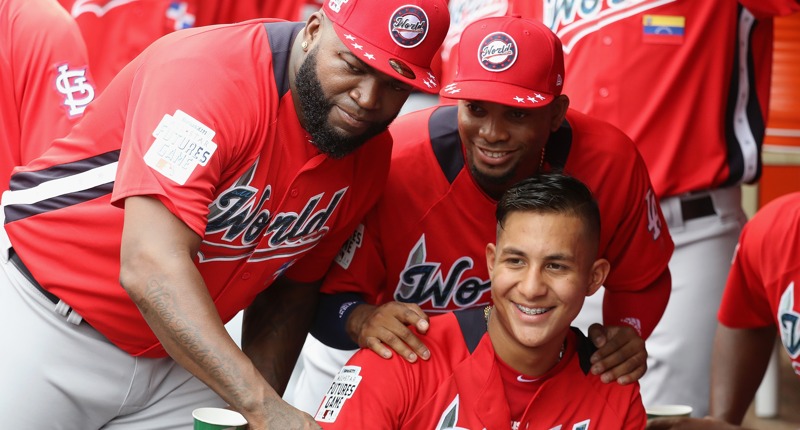 With both Baseball America and Baseball Prospectus dropping their top 100/101 prospect lists yesterday, a question a lot of Cubs fans had was whether catching prospect Miguel Amaya – who may be the best in the system – was close to making the cut, and what held him back. A 19-year-old who showed what his bat could do in his first taste of full-season ball (before understandably tailing off in the second half), who just happens to be a plus defensive catching prospect … that feels like a back-end top 100 type.

Ben Badler offered some quick thoughts on the subject of excluding low-level catchers, generally, and then included Amaya in his personal list of guys that it seems like were really close to making the top 100:

I think in general, as a group we leaned conservative on lower-level catchers.

I think internally we all have a lot of different players lined up once you get to the 70+ range.

Trevor Larnach, Everson Pereira, Miguel Amaya, Brayan Rocchio are all players I'm high on who I could see taking a big leap up the Top 100 this season.https://t.co/97eRfplj8m

It’s not an actual “just missed” list, but I think it’s fair to surmise Amaya was very close to making BA’s list.

By contrast, BP did put out a just missed list, and Amaya is right there at the top. Acknowledging, like I said, that Amaya’s profile sure sounds like a top 101 guy, here’s their take on why he just missed: “Catchers are weird. And Amaya doesn’t have the standout, obvious Top 101 “it-factor” of the backstops ahead of him on the 101. He doesn’t have Bart’s pop, Jansen’s hit tool or proximity, Murphy’s glove, Mejia’s overall bat, Ruiz’s level of polish at his age. He’s a very good catching prospect, a two-way catcher with a good approach and developing game power. We’re just not completely sold yet.”

Fair enough. If Amaya shows that his plate discipline holds up at High-A, and if the game power takes another step forward, he’ll be a very easy bet to move into the top 100/101 at midseason.

Until then, here’s Amaya cracking some batting practice out in Arizona: