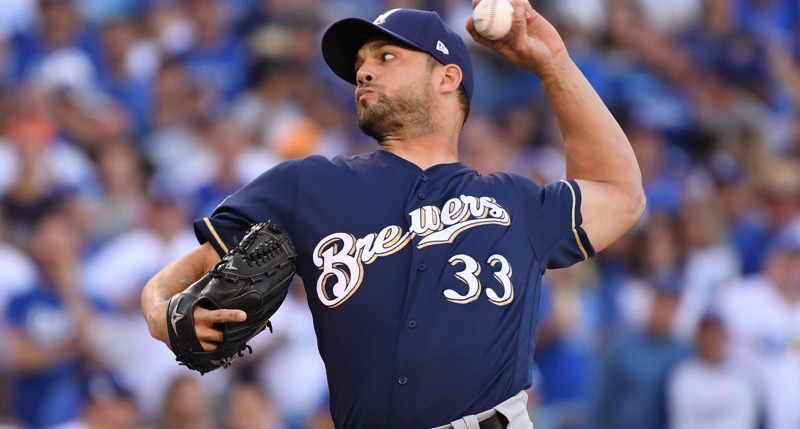 Yesterday, the Chicago Cubs added another free agent reliever to the picture, left-hander Xavier Cedeño. If you missed the introduction, Brett hit on the broad strokes of his particularly interesting career right here.

Here’s a little more from that piece to get you back in the mood (it is Valentine’s Day after all):

Good stuff, right? I can’t say I was entirely familiar with Cendeño, who actually made his big league debut against the Cubs back in 2010, before yesterday (honestly, all I can think of is former Cub Xavier Nady, who’s name coincidentally popped up the other day, too), but there’s clearly something to like here.

Unfortunately, there’s also a bit of a disconnect between how much there is to like and how much he got guaranteed by the Cubs – even in this iced-out market. And the difference between those two points were briefly discussed in the very next paragraph of Brett’s post: “Interestingly, that huge success in 2018 came after an almost entirely lost 2017 season.” Ah. An injury. Let’s pick things up around there.

In short, Cedeño had a left-forearm strain that could’ve ultimately led to a more serious surgery (hence the scary second opinion with Dr. James “Tommy John surgery for everyone” Andrews), but was able to take the injection therapy instead. Cedeño just barely made it back before the end of the 2017 season, but enjoyed a healthy and productive 33.1 big league innings for the Brewers and White Sox in 2018 (2.43 ERA, 2.95 FIP), and that gives me plenty of confidence.

But it also brings me to another sticking point: the low-inning total last season.

I’ve seen a lot of hand-wringing over his admittedly low 33.1 IP last season, while others have shrugged it off as a byproduct of being a LOOGY (more on that in a bit). While that argument may have made sense on paper, it ignores the 21.2 highly successful innings (1.25 ERA, 2.18 FIP) he tossed at Triple-A for the White Sox in April and May. The White Sox were, understandably, bringing along a guy coming back from injury slowly and in the more controlled environment of the Minors. And when he showed he was healthy over a very significant period of time, they called him up in June and the rest is history. He even tossed an inning for the Brewers in the NLCS.

So, no, he didn’t only manage 33.1 IP last season because of the injury or because he’s a lefty-only guy. He tossed 56.0 total innings (a very reasonable season total) between the Minors, Majors, and postseason, all of which were quite good.

There obviously still must be some concern about his arm there or he would’ve have gotten a much bigger deal, even in this market, but the extent I’m worried about that being his downfall has shrunken dramatically.

And now onto that other bit about him being a lefty-only guy. It’s true that, for his career, Cedeño has been far better against fellow left-handed hitters than righties:

As you can see, his production against lefties remaining constant, but he was able to drop righties’ combined wOBA down to .272! That’s really, really good. His walk rate did tick up across the board last season, and that’s something to keep an eye on – especially in this Cubs bullpen, where walks are handed out like candy hearts on Valentine’s Day (#topical) – but his strikeout rate ticked up to 21.1% against righties and 28.1% against lefties! That is a full-time, both sides reliever, and that’s just how the Brewers and White Sox used him (he faced 76 righties and only 64 lefties last season).

As far as I can tell, the reason for the season was a big drop-off in the use of his cutter from the mid-to-upper 70s% in 2016 and 2017 to 68.9% in 2018, matched by an equal and opposite increase in use of his curveball (21.1% –> 31.1%).* And as you can by the trends of his batting average against, ground ball rate, slugging percentage, and whiff rate against righties using those two pitches (all of which began losing their bite mid-way through the 2016 season), the subtle change in usage must’ve been effective:

We can’t know for sure how healthy Cedeño will be this season, though that does seem to be the biggest risk at the moment. Indeed, I think, if his forearm (and everything else) is feeling good, the Cubs may have actually landed a really interesting reliever here. I still can’t shake the fact that he wasn’t able to land a better deal than this (which makes me feel like I must be missing something), but perhaps the loaded relief market, his injury history, perception as a LOOGY, and the  slow moving market just conspired against him. The Cubs may have gotten lucky.

*Cedeño also used to mix in a four-seamer and a slider, but he hasn’t thrown either pitch since 2015. If we do end up seeing a lot of him this season – and the Cubs don’t plan to change much – I would expect a two-pitch lefty (cutter and curve).