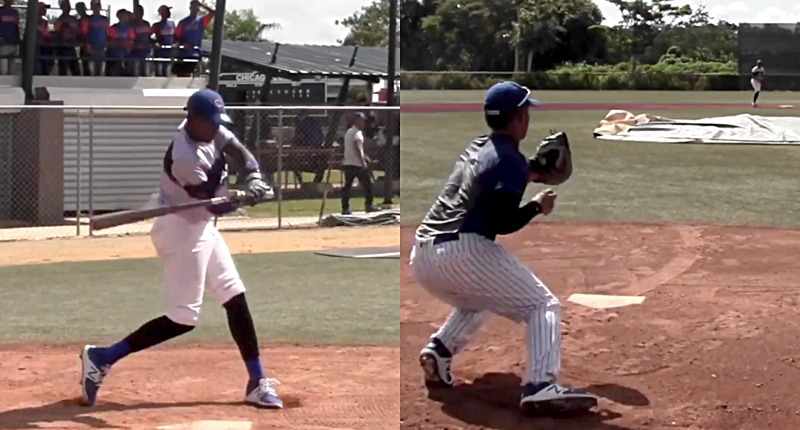 For the first time in a long time, no big league team will be limited to a $300K maximum bonus for any one international prospect when the next International Free Agent period opens up on July 2 (with the exception of the Braves, who are limited to $10K bonuses for being naughty). As Ben Badler of Baseball America puts it, that’s a “relic of the previous Collective Bargaining Agreement.”

And that means, despite being active and using their full pool this past period, the Chicago Cubs will be right back in the thick of things with no artificial restraints or need for a year or two off.

That’s obviously great news for an organization that could use as much prospect influx as any team in baseball. And whaddaya know, they’re already being attached to two of the class’ best prospects.

Recently, Badler introduced 10 top 2019 International Prospects to Watch, and tied catcher Ronnier Quintero out of Venezuela to the Cubs. According to Badler, Quintero is a left-handed, power-hitting catcher (drool) capable of generating easy pop from left center to his pull side (he only hits from the left side, he catches as a righty). Naturally – because he’s a Cubs catching target, of course – Quintero needs to work on his receiving to stick behind the plate, but I do believe that’s a skill that could take a HUGE leap forward with professional coaching and consistency.

Here’s a quick look at Quintero from Badler’s instagram:

The 2018 Venezuelan catching group included Diego Cartaya (Dodgers), Francisco Alvarez (Mets), Antonio Gomez (Yankees) and Jose Rodriguez (Rangers), among others. For 2019, here's 15-year-old Ronnier Quintero, a lefthanded-hitting Venezuelan catcher with easy power from left-center over to his pull side.

OH, and that BEAST of a man is 15-years-old. Such is the IFA world.

Soon after Badler introduced those first 10 international prospects to watch, he came out with another 10 this week, and shortstop Kevin Made from the Dominican Republic was connected to the Cubs this time.

According to Badler, Made was one of the “top players this year” and can put a “surprising charge into the ball for a skinny kid.” Scouts apparently got a good look at him at an International Prospect League showcase in Columbia and the ones that are highest on him believe he’ll be a good in-game hitter. Unfortunately, there’s not much else on him – which isn’t atypical for these sort of international prospects, but like Quintero, Badler provides us with a little video to satiate our hunger:

Kevin Made, 15, one of the high profile shortstops in the Dominican Republic for 2019. Lots of line drives with good carry off his bat for his wiry, athletic build. – #baseballplayer #baseballlife #hitting #shortstop #baseballlove

In my #NotAScout opinion, that swing looks a little long and loopy, but that’s also not really all that uncommon for young, amateur players. When you don’t need to get around on top-shelf stuff that often, you can get used to those big, powerful swings. I’m willing to bet the first thing a coach tells him is to take a shorter, quicker path to the ball, especially with his body type, but I’ll try to stay in my lane.

Badler has heard that Made will require at least $1M to sign, though he is expected to land with the Cubs … which brings me to my final point.

Although we cannot guarantee Quintero and Made will end up with the Cubs, these sort of relationships are started early and solidified quickly. Things can always change, but I am more or less expecting both to be playing somewhere in the Cubs system by 2020. These sort of uber-young, international prospects often take a long time to grow, but as Eloy Jimenez and Gleyber Torres have shown us, they can just as often be worth the wait.