Let's Say Tyler Chatwood Really Did Fix a Mechanical Flaw ... What Role Can He Realistically Fill? Skip to content

The optimism that accompanies the start of Spring Training is palpable each year, regardless of how realistic it may or may not be.

For the Cubs and their fans this year, I’d say that optimism is muted a bit, even if being optimistic about this team would be wholly realistic. They could easily be a very good team! I mean it!

But that’s not to say necessarily that optimism about every individual facet of the game or every individual player would be warranted. It’s in that spirit that I’d advise greeting the recent flurry of Tyler Chatwood updates with measured caution:

Tyler Chatwood and the Cubs believe they've fixed a mechanical flaw that dogged him last season. I took a look at the issue (with GIFs!) and explained how he could benefit from the change and why it took until the offseason to really rectify. https://t.co/Mg00wIZZfc

Tyler Chatwood's 2018 season with the #Cubs did not go according to plan… but heading into 2019, he is looking forward to his shot at redemption.

Fixing one mechanical tick yielded another, the specifics of which you can read in Sharma’s piece. In short, though, Chatwood got himself all out of whack mechanically, and couldn’t get it back together in-season as the mental side of things made it all the more difficult.

Checking out vertical and horizontal release points for a pitcher can sometimes clue you in to mechanical and/or health issues, and sure enough, Chatwood’s charts look like a guy who was way off in 2018 from the year before, and then searching for it all year: 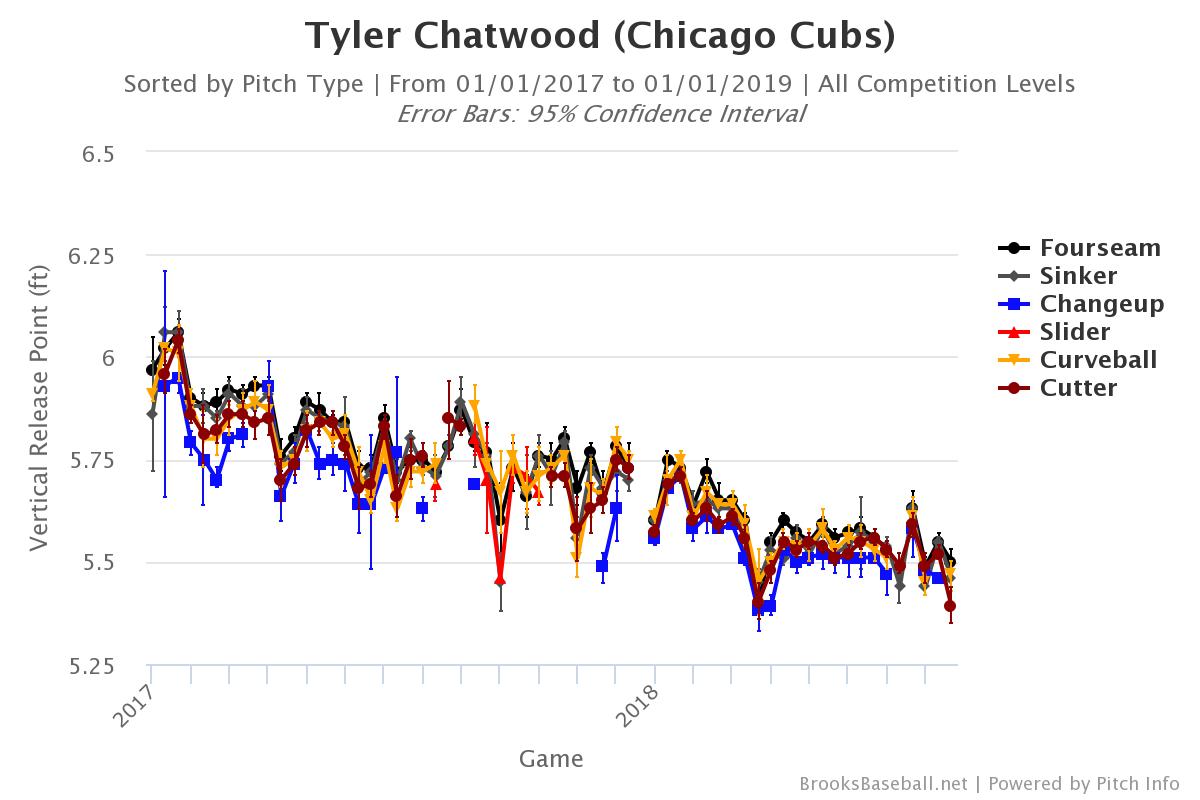 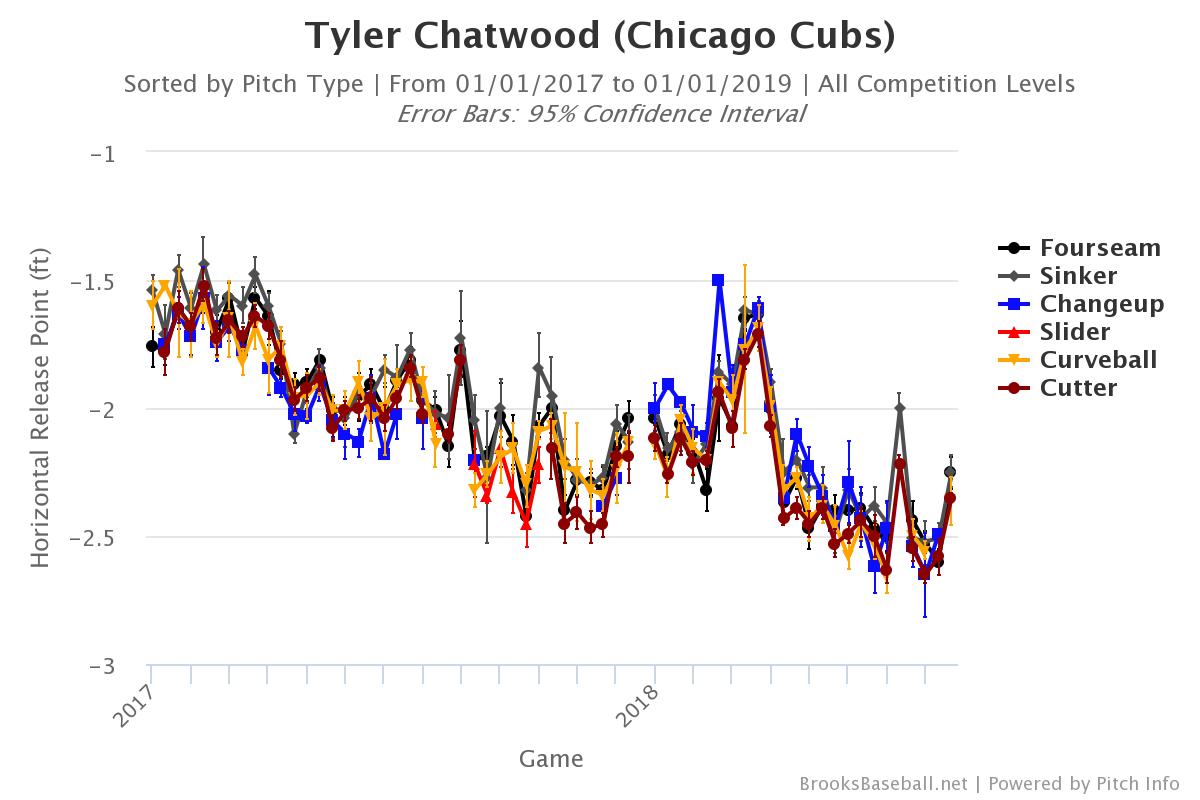 As his then-video-man and current-pitching-coach Tommy Hottovy put it: “He knew he was doing it. But it’s one thing to see, another to completely try to change in the middle (of a season) and you’re struggling and trying to find your way …. In the offseason, when you’re trying to come back, a lot of times you almost have to re-teach yourself how to throw. So right from the beginning, you can re-train those movements, re-train those patterns. It’s definitely something you can see, year-to-year difference on video just how exaggerated that was. He’s going to have that move, but cleaning it up and simplifying it a little bit is something he’s been focused on.”

Sharma’s piece is a fantastic look overall at the way the Cubs are using video to help get pitchers on track, and on Chatwood’s journey specifically. And Jordan Bastian has the full Q&A with Chatwood here, in which he gets into more of the specifics of how things went wrong last year, what he identified mechanically, and how he’s working to get it right this year.

Good. Great. Fine. I won’t completely close the door on Chatwood being productive again, given the incredible stuff, his age (29), and the fact that he’s already had big league success in his career. If he’s truly fixed some mechanical issues and is in a better place mentally to deploy the fixes, then, cool. I’m excited to see how he looks.

But I do think we need not sleep on the elephants in the room: Jon Lester, Yu Darvish, Cole Hamels, Kyle Hendricks, and Jose Quintana. If those five guys are healthy when Spring camp closes, then they will be the Cubs’ five starting pitchers. It will not matter what Chatwood looks like. He will simply not have a spot. And even if one of those starters was down, it’s not a lock that Chatwood – even if he looks good – would be the next man up, over a guy like Mike Montgomery, for example.

So then, assuming the rotation is healthy and the Cubs do not opt to go with six starters out of the gate, they’ll have just a few options on Chatwood: Injured List him, trade him, bullpen him, or release him.

If he’s healthy and pitching very well in the Spring (to the extent you can actually divine meaning from that), releasing him and his $25.5 million remaining dollars over the next two years, isn’t going to be the best asset/roster management approach. I don’t want to tell anyone I think Chatwood can put it together in 2019 – guys almost never come back from the kind of wildness he experienced, which was borderline yips – but I do want to keep in mind that it was just one year. Before that, he was a useful pitcher, at a minimum. You don’t just flush a guy like that for nothing and eat his entire salary if he’s pitching well.

To my mind, trading Chatwood for a little salary relief and/or a marginal prospect is probably the most ideal outcome from this Spring. The Cubs are overflowing with bullpen options and depth starter options (ones that don’t have to be kept on the 25-man roster, to boot), and if they could just move on, I’d feel more comfortable with that than trying to rely on Chatwood for meaningful innings.

But if the Cubs evaluate him this Spring, and they feel like he’s really, actually, clearly, definitely figured things out, and is going to be a useful pitcher in 2019, then fine, let him win a job in the bullpen. Even in the torturous hellscape of his 2018 season, righties couldn’t do diddly poo against him: .144/.359/.219, .288 wOBA. If the 22.6%(!!!) walk rate comes down at all, then he could probably already be a successful ROOGY. Not ideal for a modern bullpen arm, but if the Cubs are bound and determined to hang onto him, then that’s a way he could actually contribute if he’s not in the rotation.

For now, though, for Spring Training, there’s really no reason to worry about too much of this. Lots can happen in the coming weeks that will set this entire discussion on its head. Let him work, let him show how the mechanics are clicking, and figure out what’s what in late March.