Just Saying: Martin Maldonado is "Holding Out Hope" for a Big League Deal Skip to content 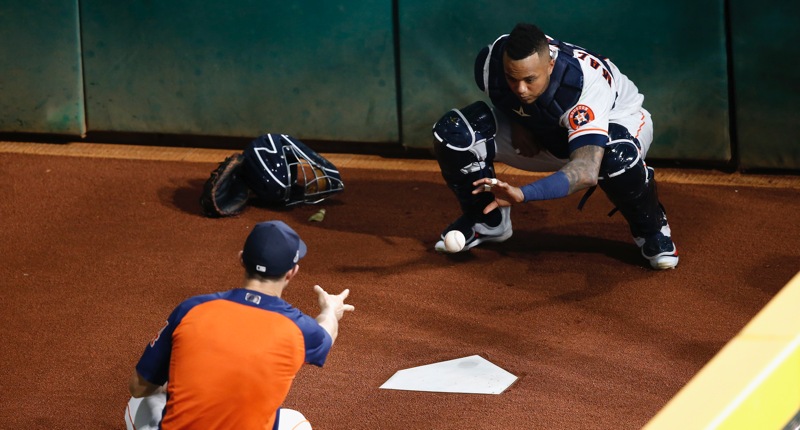 If that’s all it would take … How? How are the Cubs not jumping on this? HOWWWWWWWWWW:

In this story, @RyanDivish writes that Martin Maldonado is "holding out hope for the protection of a full major-league guarantee."

That's one of the 3-5 best defensive catchers in MLB with basically no interest. Ridiculous.https://t.co/hP5XwclLLq pic.twitter.com/gkJMWdE9sC

If it’s true that Maldonado simply needs a big league deal – what, like $2 million on a one-year deal? – to sign, then the Cubs should sprint to couch cushions to find the money to make it happen.

As we’ve intoned religiously this offseason, it makes so much sense for the Cubs to have a veteran back-up in place who can take more of the load off of Willson Contreras, while simultaneously working with him on receiving skills and simultaneously deploying those skills in 35-40% of the starts to benefit the Cubs’ pitchers. Victor Caratini could potentially be a very solid back-up catcher to pair with Contreras, but maybe he’s simply not that guy yet. Given how badly Contreras wore down last year, and given what might be a lack of trust in Caratini to take on a large chunk of the starts, why not bring in an elite back-up catcher for a year?

Maldonado, 32, is not going to carry your offense, but he’s also not going to kill you at the plate – his recent numbers and his projections all give him the look of about a 75 wRC+ guy, which isn’t that far off from the league average catcher (84). In exchange for that lesser offense, you get a guy who rates not only as one of the best defensive catchers in the game, but also one of the best pitch-framers.

How is that not worth a couple million bucks at this time for the Cubs?

Again, I’ll concede that it’s possible that Maldonado, a Scott Boras client, is actually still seeking quite a bit more than that. We can’t know for certain (and he undoubtedly was when the offseason began). And I’ll also concede that the Cubs may have some other plan in place based on catchers who could soon become available. But if Maldonado is truly to the point where he’s just trying to find a modest big league deal, and if there is no other yet undisclosed plan in place? GIVE IT TO HIM.