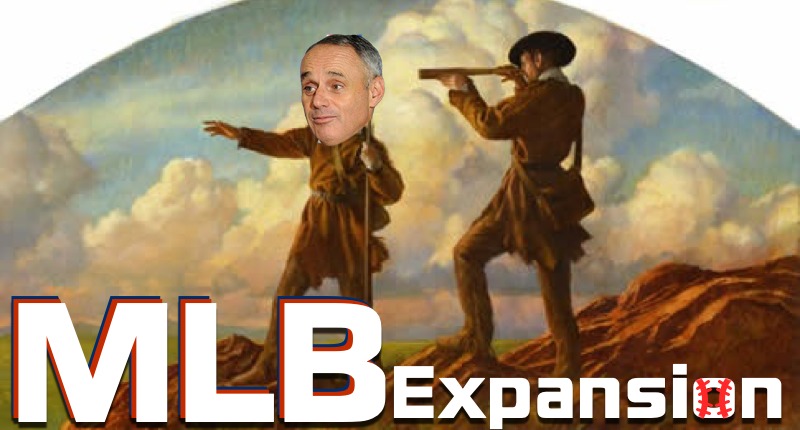 Although just about everything about the game of baseball is – and probably should be – on the table of change at the moment, there’s not a ton of consensus around almost any of the proposals.

Indeed, amidst all the squabbling over DHs, shifts, roster sizes, batter limits, automatic strikezones, and pitch clocks, we find but one small exception: MLB expansion.

Don’t get me wrong, not everybody is on board with adding a couple new teams, but there just doesn’t seem to be NEARLY as much ire as there is with other MLB matters of change. Perhaps fans are just used to it by now. Or maybe the fact that the game, itself, wouldn’t appear to be changing smooths things over, but expansion does seem to be the one proposal that doesn’t immediate burst blood vessels across the country.

I also think the slow introduction of the idea has probably helped.

For a few years now, the Commissioner, Rob Manfred, has been teasing MLB’s expansion from 30 to 32 teams, pointing only to the ballpark deals in Oakland and Tampa Bay as roadblocks standing in the way. But now that both stadium issues seem to be creeping toward resolution, the topic of expansion is similarly creeping back into the conversation.

Here’s the latest on the matter, from the Commissioner, himself: “I would like baseball to be in the midst of exploring whether we could get to 32 teams, either by adding additional teams in the United States but also open to the idea of Canada, Mexico, as possibilities. I think 32 opens up the opportunity for a substantial rethinking of our format and postseason format, meaning realignment, as well as reconstruction of divisions. Maybe even geographical realignment.”

Manfred might claim that he “would like” baseball to begin “exploring” whether they could get to 32 teams eventually, but I think it’s safe to say that this is probably the plan. In fact, I think we’re just seeing a systematic rollout of the concept so fans continue to grow used to the idea, easing the transition when it does happen. There’s clearly interest out there from somebody, it’s been over 20 years since the last expansion teams were added, and other major sports leagues (NHL and NFL) have proven that you can do more than 30 clubs. (Oh, plus, existing owners get a huge buy-in fee when the league expands.)

If you ask me, I think it’s an absolutely great idea.

Just by adding two new teams into the mix, you can theoretically address a lot of problems.

Like increased competitiveness: Imagine a world where MLB is comprised of two 16-team leagues (the National League and American League), where each league contains four divisions of four teams each (north, south, east, and west). Each division can send their first-place team to the postseason and each league can send two Wild Card clubs. Suddenly, you have two MORE teams entering the playoff picture. With an increased shot at reaching the playoffs, more teams will try to compete on a yearly basis *and* might resist selling off entirely early in the year.

Sure, that might make the BN Blogathon a little less active at the deadline, but I suspect major trades are not going away anytime soon.

And how about improved travel: So long as they do their best to preserve some of the best rivalries (Cubs-Cardinals, Yankees-Red Sox, Dodgers-Giants, etc.), a league and division restructuring could bring about geographical changes that positively affect travel.

Smooth introduction of the DH: And if even one of those teams switches from the AL to the NL, the league will suddenly have the perfect excuse to introduce the universal DH (I know, I know … I just lost some of you, but whatever).

And lastly, in my opinion, it’s just fun. As a 90s kid, I don’t really remember the last round of expansion (Rockies and Marlins in 1993 plus the Diamondbacks and Rays in 1998). Having two entirely new teams in new cities would be a blast and would undoubtedly bring more attention to a sport that could use it.

And if one of those teams really does end up outside of the U.S., like in Mexico, the game of baseball could get a little more international attention, which wouldn’t hurt either.

This is not to say there’s nothing to be concerned about – there is still so much to figure out before we get here – but I like where we’re heading. And if I’m reading Manfred correctly, we might be going in that direction at this point no matter what.