Mike Montgomery Is the Cubs Pitching Swiss Army Knife, and He's Embracing It Skip to content 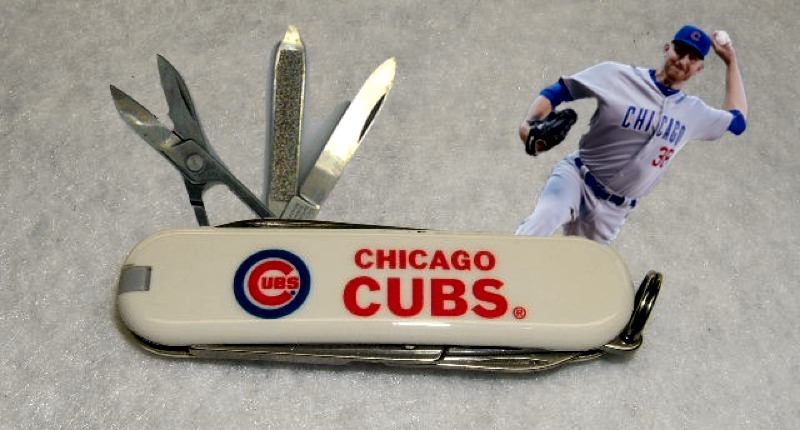 Earlier this morning, the Cincinnati Reds announced that one of their big offseason pickups, Sonny Gray, had been scratched from his first start of the Spring with elbow stiffness. Although, individually, that injury was probably a surprise to the Reds, the broader revelation (a notable pitcher was slowed by an injury early in Spring Training) is about as certain as death and taxes.

Injury prevention and treatment has improved dramatically over the years, but as sure as the sun rises in the east, pitchers get injured. And that fact is precisely why someone like Mike Montgomery has been so uniquely valuable to the Cubs since arriving back in 2016.

Although he was originally acquired to supplement the bullpen, Montgomery’s abilities as a swing starter were immediately apparent. And after making 14 starts for the Cubs in 2017 (4.15 ERA, 3.94 FIP) he came into last season looking for a bit of an expanded role and ideally more guaranteed starts. The Cubs were unable to commit to him as a starter, but promised that he’d almost certainly get his shot (death and taxes … and starting pitcher injuries). And he did!

Last season, Montgomery wound up making 19 starts for the Chicago Cubs, tossing nearly 100 innings as a starter and another 26.1 innings as a reliever. He had even more success as a member of the rotation this time around (3.69 ERA, 3.84 FIP) and proved an invaluable member of the team.

Unfortunately (for him), the Cubs retained Cole Hamels immediately after the 2018 season ended, which, when combined with Yu Darvish’s healthy return, puts Montgomery on the outside of the rotation looking in once again.

But from the sounds of it, Montgomery isn’t sweating the signing or his position on the roster this time around: , saying that he was “rooting for us to sign [Hamels] in the offseason.” According to Jordan Bastian, Montgomery has come to terms with the reality that he will exist as the “next man up” on Chicago’s staff, even if his preference would still be to have a full-time rotation job from the get-go.

It seems he’s learned that every team’s sixth starter should get an extended look before the season is through and has adjusted to that role, in his own head, as well: “The mental game is, as everyone knows, really important,” Montgomery told Cubs.com. “That’s one of the areas that everyone can improve on, is just being good at what you do despite the role. So having been through that the last couple years, I feel comfortable with it. And I feel clear in my head about whatever comes my way.”

It’s worth noting that Montgomery has been slowed, himself, this spring by some left shoulder stiffness, but the versatile southpaw has been playing catch on flat ground and is scheduled to for some long toss as soon as today. After that, a bullpen session is just around the corner and the Cubs are reportedly not concerned with his status for the start of the season.

“He’s ready to rock and roll,” Joe Maddon said. “He’s been all over the map regarding different roles, and the beauty of him is the fact that he’s ready to accept them all.”

So, if all goes according to plan, you can pretty much assume Montgomery will once again get a dozen+ starts for the cubs in 2019, while pitching out of the bullpen the rest of the time. It’s a really hard job for a pitcher to hold down, but it’s also an invaluable one. And Montgomery has demonstrated the ability to handle it.