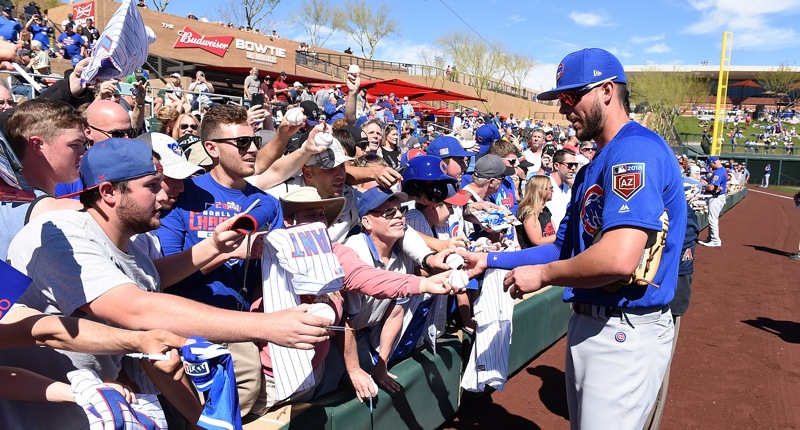 The game is at 2pm CT against the Brewers at Sloan Park, and we’ll apprise you of the particulars in your usual Pre-Gamin’. Until then, the lineup is here, and the Bullets …

Remember this supposed Morrow sinker? I wrote about it last year when Morrow told me he doesn't throw a sinker. He had a few theories back then why it was happening, but now, with the help of some tech, he was able to confirm exactly what was going on: https://t.co/3ftBkABnCn https://t.co/KHtM7suCjL

I obviously hope Ben Zobrist doesn't retire and instead plays FOREVER. But if he is going to retire at the end of the year, I kinda wish he would announce it now so that we could really celebrate each game, each start, each last visit to a ballpark, etc. https://t.co/zFKMTNf7Ad

Venezuelans throughout out the majors beg their country's soldiers to let humanitarian aid into the country and "get on the right side of history." Venezuelans Vizquel, Contreras lead social media pleas for aid – La Vida Baseball https://t.co/ZIS476FmPY

The White Sox initial leaked offer to Manny is what got the Padres involved. Then Manny consulted Yonder Alonso & Jon Jay, two dudes Chicago brought in to woo him there, and they both raved about San Diego instead. The amount of own goals here by Chicago…it's incredible.

An idea advocated by Yadier Molina and mentioned by Jim Edmonds has shaped Mike Shildt's lineup plans this spring: Starting today, he'll keep the "spine" of the defense together often, as he, Wong, and Bader explain: https://t.co/DUGq4x1ixy #stlcards #Cardinals #MLB

Jose Martinez had a good-money opportunity to play in Japan, which prompted the conversation on this two-year deal with the #STLCards, John Mozeliak said.

Jose Martinez gets 3.25M, 2 years. Plus incentives. Would have been 1st time arb next year.

Reds have a deal with Jose Iglesias. Another nice move for them to get such a terrific ss to agree to backup role. @ctrent with the good sleuth work as he found a locker for Jose in Goodyear.

The Cubs are heading into another year with Victor Caratini pegged as the backup catcher, but the 25-year-old believes he's much better suited for the role now.https://t.co/mauio5Vl8s