Recapping the Eugene Emeralds: The Unlikeliest Of 2018 Champions
Search
Skip to content 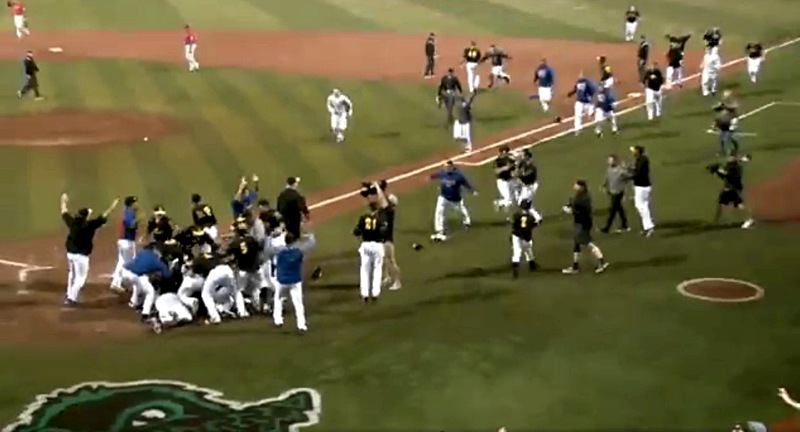 [Ed. Note – Although Luke has departed as the regular minor league guy, he did leave us with this fantastic write-up of last year’s only championship team in the Cubs organization.]

By the time August rolled around, I thought the Cubs’ streak of having at least one championship team somewhere in the organization was probably dead. I had thought Tennessee and Myrtle Beach had the best shot in the minors, but neither were playing particularly well. In the majors, the Chicago Cubs just couldn’t shake their problems on offense. The streak was on life support.

Enter Eugene. Despite having the worst season record in the league, the Emeralds snuck into the second half playoff spot in their division by virtue of (1) Hillsboro clobbering everyone else so bad no one else in the division had a good record, and (2) somehow backing into the playoffs in the final weekend despite losing games that were just about must win.

That meant a team with a well under .500 record, a team that hadn’t won more than two games in a row all year, got a playoff date with league juggernaut Hillsboro. Even once they were in the postseason I put the odds of them beating Hillsboro twice at under one in five.

They beat Hillsboro twice. And then, because of league rules and a weird scheduling conflict, they got to play every single game of the championship series at home. Three wins later, the 2018 Eugene Emeralds not only had their only five-game winning streak of the season, they had their second championship in three years. And of course they won the title on a walk-off balk.

How’d they do it? How did a team that struggled all year long win five straight against the best teams in the league in the playoffs. Don’t ask me. I’ve never seen anything like it, and probably never will again. But if we look at similar improbable winners from other seasons in baseball, there is one trend that seems to thread them together. Somewhere on those teams there was a player or coach who was an exceptional leader. I suspect that is the case here as well, and I think who that person is will become clear in time. For now, I just can’t wait to see what this bunch does for an encore in South Bend next year.

Onto the individual prospects. This a fun bunch that comes with a good mix of players where the potential is obvous and players who have a chance to make an impact with some adjustments. There are also a handful of guys who have high potential, but for whatever reason didn’t really produce in 2018.

At the top of the heap is 2018 first round pick Nico Hoerner. Hoerner was only in Eugene for 28 plate appearances (he was promoted well before the playoffs), but he finished with a line of .318/.464/.545, six homers, and four steals.

If you want to be irrationally excited by any prospect in the farm system, make it this guy. There is a chance that in Hoerner the Cubs have found a guy with true star potential at the bottom of the first round. It is way too early to say how good of a chance, but the tools are there: good contact, good power, good glove, good understanding of the game. I think he can stick at shortstop, I think he can hit for average, I think he can have average power, and I think he can move quickly enough he contributes in the majors some time in 2020. I also think those factors make him one of the most tradable players in the farm system, so you might not want to get too attached. Still, he should be fun to watch in Myrtle Beach this summer.

The Cubs have a pretty good track record in the tenth round, and in 2018 they took corner infielder Luke Reynolds, a left-handed hitter who put up a wRC+ of 127 in 141 PA after being drafted. He seems to have the patience (12.8% BB rate) down, and shows signs of some power (.132 ISO, .421 SLG) already. We’ll just have to keep an eye on the strikeout rate (23.4%) as he moves up. If the strikeout rate stays stead, he may start the year in South Bend but I think he’ll finish in Myrtle Beach.

Grant Fennell signed as a free agent after the draft and spent most of the season playing in left and on first for the Emeralds. In 173 PA he finished with a wRC+ of 116, including four homers and three steals. It is hard to be sure what to make of Fennell. It is rare enough that we talk about non-drafted free agents at all, let alone because they held their own at the plate in a tough league. It could just be a case of polish triumphing over less experienced players, but there are a lot of college pitchers in the Northwest League each season. For now, I’d just consider Fennell someone to follow when he moves up to South Bend.

Middle infielder Andy Weber was drafted out of college in the fifth round, and played pretty well for the Emeralds. His wRC+ of 100 is held back mainly by his lack of power (.038 ISO). The rest of his numbers are pretty good. Looking at his contact rates, one problem in the power department is likely that he hit over 43% of the balls he struck onto the ground. That’s not bad, but it isn’t great either. If he can turn a few more of those into fly balls, and if he can build up a little more muscle, Weber could produce enough at the plate to keep him employed as a utility guy for a long time.

Nelson Velazquez was a product of the 2017 draft, and after very rocky season debut with South Bend he rebounded nicely to finish up with a wRC+ of 115 over 293 PA for Eugene.

One more hitter to follow closely as he moves up: D.J. Artis. The Cubs drafted him in the seventh round, and he is very fun to watch. He is small (5’9″), fast (6 steals in 20 games), has an odd swing, a good eye (10.3% walk rate), and makes good contact. Now, will that turn into a regular left-handed hitting outfielder? Who knows. South Bend fans should get to form their opinions first hand in the spring.

Some of the most exciting players at Eugene, names you should definitely remember, didn’t have great seasons. Fernando Kelli might be the best baserunner in the Cubs’ farm system, but he only got on base at a .308 pace (and still finished with 28 steals). He was just 19, though, so definitely keep an eye on him. The same goes for slugger Jonathan Sierra. His raw power rivals that of anyone in the organization, but somehow that only translated into a .107 ISO and a wRC+ of 92. He’ll need to make some adjustments as he moves up, but the potential is definitely there. Luis Vazquez has drawn a fair amount of attention as a gifted shortstop, but in 59 games for Eugene he managed a wRC+ of just 53. The glove is not in question, but he’ll have to improve at the plate if he’s going to stay on the radar. All of these guys should be in South Bend in the spring.

On the pitching side, let’s get the bad news out of the way first.

I still love Jose Albertos’s stuff. I still think he has the arsenal and natural late movement to be a very good pitcher one day. Unfortunately, in 2018 he lost any ability to get the ball over the plate. The only thing more impressive to me than his 17.13 BB/9 (in just 17.1 IP) is the fact that he still managed a K/9 of 10.90. Somehow, despite everyone in the league knowing that Albertos was as likely to bounce the ball five feet in front of the plate as he was to get it into a hittable position, he still struck out 20% of the batters he faced. That should give you some idea how nasty his stuff can be… when he can locate it with any degree of accuracy.

Which, to be fair, he really couldn’t. I have no idea what to make of Albertos right now. I love the potential, but somehow he got tragically off track. If he can recover his 2017 form he could potentially be a fringe Top 100 guy by the end of 2019. That’s a titanic ‘if’, though. Here’s hoping.

Brailyn Marquez, also 19, emerged last season as one of the best left-handers in the organization (and probably one of their best pitching prospects period). Marquez is already throwing in the upper 90s, generates a lot of grounders (over 52%), and still has very healthy strikeout and walk rates (9.82 K/9, 2.64 BB/9). He may well be the best teenager to take the hill in the farm system since Dylan Cease. He won’t move fast, though. The Cubs will take their time with Marquez (if they don’t need to trade him for Major League help first).

Other than Marquez, we may have to take a ‘wait and see’ approach to a lot of the 2018 Eugene pitchers.

Paul Richan (2018 draft, 2nd round) also pitched very well (3.05 FIP, 9.40 K/9, 1.52 BB/9) and could jump straight to Myrtle Beach in the spring (rosters permitting), but his success seems to be driven more by control than stuff right now, and that makes him a little hard to project.

Jeffrey Passantino pitched in 30+ innings for both Eugene and South Bend, but despite his very good strike out rates and very low walk rates, his 5’9″ stature probably makes him a bullpen arm until proven otherwise. He could move fast, though, and might be ready to contribute by 2020.

Faustino Carerra was a 19-year-old lefty who pitched 67 innings for the Emeralds while putting up an ERA of 2.54, but none of the peripheral numbers stand out. He could be a breakout candidate in 2019, but at 5’10” he could also be a reliever in waiting. We’ll see when he gets to South Bend.

There is plenty of talent in this class of pitchers, but right now it is tough to recognize which of them we really need to focus on outside of Marquez. On the other hand, that should make watching South Bend next year a lot more interesting.

And that might be the best way we can look at this entire class. There is a lot of talent, more than is represented by Eugene’s final win/loss record, but the development thus far has been uneven. This may be a very good group of prospects who win another title or two before they reach the majors. And they may not. But by the middle of 2019, I think we’ll have a much better idea than we do today.