Yu Darvish Was Hitting 96 MPH, Felt "No Pain" in First Spring Start of the Year! Skip to content 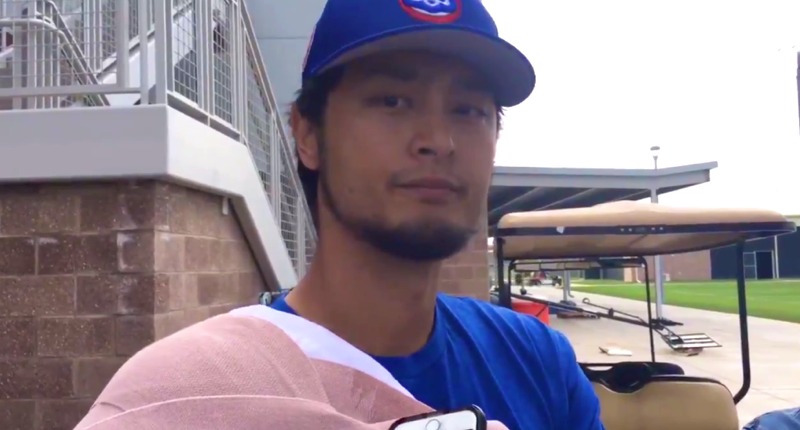 Earlier this morning, we discussed Yu Darvish’s increasing commitment to speak English more often in 2019 – an apparent effort to get him closer to his teammates and to better appeal himself to the English-speaking Cubs fans among us. It wasn’t something he really needed to do, but it was something we were plenty happy to see – and, hey, if a more comfortable, happy Darvish off the field means a better Darvish on the field, who’d opposite it?

But more importantly today, Darvish also made his first start of the Spring and it was mostly fine in the most important way (he felt no pain!), but his command was an issue.

Here’s how things played out:

All in all, he managed just 1.1 IP and threw 36 pitches (17 for strikes). He didn’t give up a hit, but obviously the four free passes aren’t great either. At the same time, having spotty command in your first Spring start of the year (or any Spring start, really) is not the end of the world. Pitchers are often working on highly specific, but unknown to us, things that wind up delivering undesirable results. The absolute, bottom-line victory here is that Darvish was healthy and was not set back by any pain or discomfort, according to his own words after the game. Given the way last season end, that’s very good news.

Oh, yeah … I almost forgot. Did I mention he was throwing 94-96 MPH!? Multiple eyes on the radar gun can confirm:

Darvish pitches a scoreless first inning, despite a pair of two-out walks. Lots of fastballs (95-96)

95 mph on the radar gun for Darvish.

Gun already reading 95 as Darvish gets a fly out on his second pitch of the spring.

Yu Darvish's day is done. He threw 36 pitches (17 strikes) in 1.1 innings. Walked four. Generated one swing and miss. No hits allowed, but control spotty in first start since Aug. 18 rehab outing. The positive is obviously health and velo (94-96 mph). pic.twitter.com/3P0eigugWD

Given that health is our primary concern for Darvish at the moment, it is quite heartening to see him already up at 94-96 MPH in the Spring. Pitchers tend to ramp up as February and March go on, but Darvish is already at his fighting weight, so to speak. In fact, according to Pitch Info’s pitch velocity readings, Darvish has been throwing between 94.7-94.9 MPH over the last three years, so this is actually a step UP in velocity for him, even without accounting for any sort of ramp up time.

Obviously, you hope he isn’t overextending himself out of excitement to finally be back out there or something, but also … it’s hard not to be a little giddy about those extra couple clicks on the radar gun. Who knows, maybe that’s why his command was a little off and he’s still finding the happy middle.Then again, he said he was baffled by his inability to throw his *breaking pitches* for strikes, not his fastball, so perhaps we’ll keep an eye on that as the Spring rolls on.

Ultimately, Darvish was feeling good and looked strong, saying as much, himself, after the game (and some interspersed highlights in the second clip):

Yu Darvish said he was excited to the point that today felt like the first game of his life. Breaking ball command off, but happy with how he felt physically. pic.twitter.com/c9IFd7buZK

Next step: We’ll hopefully find out that he feels just as good tomorrow as he does today, and we’ll look ahead to his next start! Woo!