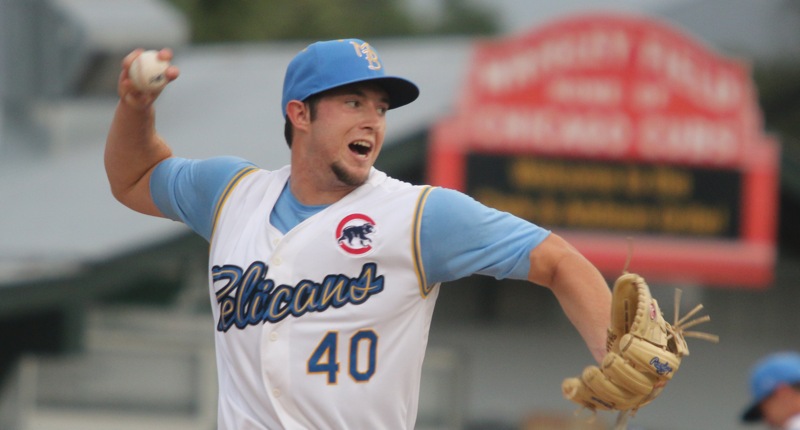 We are ranking the top 20 prospects in the Chicago Cubs farm system as the 2019 season opens up. A state of the farm system, an introduction, and prospect number 21 are here.

As we open up the top Cubs prospect list for 2019, it begins with five right-handed pitchers, which battles shortstop as the farm system’s strength. Let’s get right to it.

Has: Uelmen reminds me of that golfer, you know the one: shows up to the course in sneakers and cargo shorts, has the wrong grip and the ugly swing, but crushes 300 yard drives nonetheless. At some point, the raw athleticism takes over and corrects everything else. Uelmen is the organization’s most athletic pitcher. This translates to the mound best with a fluid arm action and power sinker. His Low-A stint produced the 10th best groundball rate in Low-A over the last 5 years (min 50 IP).

Shows: A reminder of why the sinker/slider archetype has long been a thing: it’s really the original tunnel. Those two pitches start the same way, and then right as the hitter has to make a decision, dart down in essentially opposite directions. Uelmen’s slider, then, becomes the essential pitch for him to make it to the Majors. He must be able to throw it in any count, whenever the catcher senses a hitter sitting sinker. There are starts you’ll see that kind of confidence, and his feel for the slider is good-ish, but we need significantly more consistency.

Needs: Golf pants. Er, I mean, smoothing out. You have to imagine pitching coordinators/coaches are thrilled to take their shot with Uelmen, as more consistent mechanics could unlock so much possibility. Part of what makes Uelmen a fun watch is the wildness of his delivery; sometimes he’ll land with a hop, sometimes with a fall towards first base. Sometimes the slider becomes a wild pitch as his front shoulder flies open. A smoothed delivery could add so much: sinker command, slider consistency, perhaps even more velocity.

Has: Gloveside command, which if you watch as much Northwest League baseball as I do, is an exceedingly rare attribute in the low minors. Richan owned the corners in his professional cup of coffee, particularly the outside corner to right-handed hitters, who hit just 145/175/236. I also really like Richan’s slider, probably the most of his pitches. He’s shown comfort frontdoor-ing it to lefties and it’s just death to RHH’s.

Shows: An advanced, mature full starting arsenal. Richan will throw 5 pitches: 2-and-4 seam, slider, curve, change. The curve and change both need enhancing in the Cubs system, and finding a pitch usage balance is going to a learned process. But like with Keegan Thompson last year, the expectation is Richan’s slew of options should allow him to rise quickly.

Needs: In three years at the University of San Diego, Richan gave up 219 hits in 189.2 innings. He’s not immune to hard contact, and he will have to prove more adept at avoiding that. While there’s not much projection left in the 6-2, 200 frame, I do see the possibility for Richan to add some better muscle, and perhaps the fastball ticks to 93+ a little more often.

Has: While I’m not comfortable ranking players I have exceedingly limited video on, there’s one thing clear in Gallardo’s available YouTube clips: a really, really good curveball. It might just be the best in the system, and he’s yet to throw a pitch for the organization.

Shows: Velocity up to 94 mph, with late life, as a 16-year-old. The Cubs believe that, as they were able to with fellow modestly-sized Venezuelan Adbert Alzolay, that in their strength-and-conditioning program, Gallardo’s average fastball velocity could grow into the mid 90s. He also throws a change-up with plenty of confidence, and when paired with the Cubs organizational strength in developing that pitch, we can project a nice three-pitch mix.

Needs: Innings and instruction. We need to see in game play how much work is still left in respect to Gallardo’s command. He will start 2019 in Extended Spring Training, and the Cubs will decide there which summer league is better for him this year: the Dominican or Arizona. At either stop, we’ll have a better idea just how raw a project Gallardo is.

Has: It’s obvious when you watch Miller – elite fastball spin. For a guy who sits in merely the low 90s, Miller gets so many swings and misses with his fastball. Miller’s 4-seam fastball has natural cutting movement (like you see from C.J. Edwards), so the Cubs encouraged him to embrace and try to maximize that advantage. His 2-seam movement is more subtle, but the little arm-side movement comes late, and hitters are seemingly always underneath it.

Shows: At his best, it’s clockwork. Strike 1, a two-seam fastball on the arm-side of the plate. Strike 2, a four-seam cutting to the other corner. Ball 1, a chin-high fastball the batter spits at. Strike 3, the off-speed at-or-under the knees. So for Miller, the key is commanding the fastball early in the count, getting the hitter off-balance and guessing, so the count can do some of the work his raw secondary stuff does not.

Needs: One of 2 things, and which one it is probably decides his ultimate role. If he’s to be a starter, he’ll need more from his secondaries. The slider is one-plane and tight, capable of swings and misses, but it’s not something you’ll see on Pitching Ninja anytime soon. The change-up flashes pretty good, and was helpful in his 24% K-rate to LHH’s. But the usage is still pretty low. Miller’s other path would be in relief, where he could almost surely tap into more velocity, and throw his fastballs even more often. You can imagine if he’s sitting 93-96, with his natural movement and spin, he’d find bullpen success.

Has: While at the crossroads of his career in college, Abbott researched how Noah Syndergaard throws his slider. Let’s be clear: Cory Abbott and Thor fill out a jersey differently. Noah throws harder in his sleep. And yet, in fooling around with Syndergaard’s slider grip, Abbott’s career changed. He stumbled into the perfect pitch to play up all his other offerings. His slider – sometimes called a cutter – is almost like the exact midpoint between his fastball and curveball. It, by itself, is not a particularly plus pitch. But when all together, they exist within a tunnel that hitters really seriously struggle with. His 2018 was one of the most dominant seasons by a legitimate pitching prospect the Cubs have had in a decade.

Shows: Hints of the command necessary for him to have Major League success. Abbott is all-the-way maxed out in his body, and there’s likely no other pitches to add. He is what he is. And so, with the stuff on the fringier side, there’s an absolute importance on Grade A command. And not a lot of wiggle room around it.

Needs: It’s all about the changeup against left-handed hitters for Abbott. His platoon split difference was 207 points in OPS last year. Abbott’s change is currently easily the worst of his four offerings, it often is hung up there asking for damage. We have heard Cubs minor league pitching coordinator Brendan Sagara is leading the pitch design charge within the Cubs organization. I’m just thinking out loud here, but I wonder given Abbott’s previous success with seeing a grip and adding a pitch, if rebuilding his changeup from the ground up could be just what the doctor ordered.

Up next: 15-11, where we see the upside lottery tickets in the system.