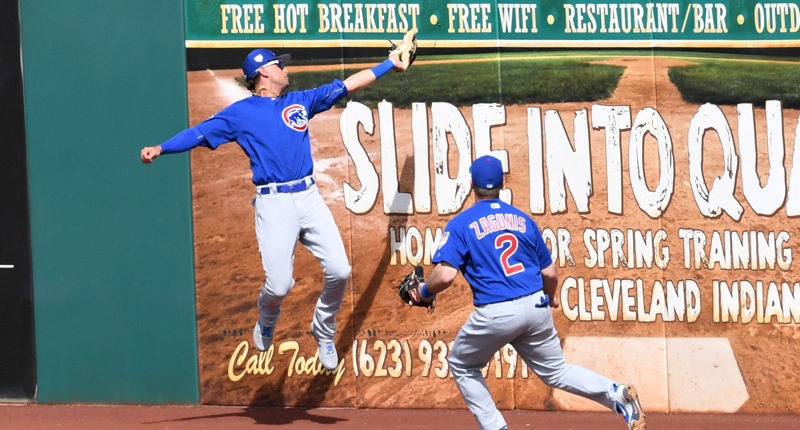 With the Cubs sending mostly youngsters and minor league vets out on the far trip to Goodyear to face the Reds, they nevertheless had enough to win handily, thanks in large part to Albert Almora, who led the game off with a dinger and made an Almora-like catch in center:

In the game, Alec Mills started with two scoreless, striking out three and allowing a walk and a hit. A quality depth piece as a starter or a reliever, Mills was on Bryan’s list of just-missed top 20 prospects earlier today.

Mills was followed by three consecutive scoreless innings from bullpen competitors Brian Duensing, George Kontos, and Randy Rosario. Then Allen Webster came in for two perfect innings with three strikeouts (one of which was Yasiel Puig). Folks who saw him last year and folks who’ve seen him this spring think the stuff looks really, really good for what it’s worth.

Meanwhile, back in Mesa …

Lefty Mike Montgomery threw 29 pitches in two simulated innings. His goal was just to come away feeling healthy and strong, which he did. Reliever Brandon Kintzler worked one 15-pitch inning in the same sim game.

Cole Hamels threw 45 pitches in his simulated game. Worked three "innings". Had six swings and misses. Focused on his offspeed pitches. A couple strikeouts (one swinging, one looking), a couple groundouts, no hits. pic.twitter.com/vDEYYYYdRU

Hamels and Rizzo laugh it off after the lefty hit the Cubs first baseman with a pitch in Monday morning's sim game.

Hamels: "I'm sure he's going to remind me daily as that bruise gets bigger." pic.twitter.com/zvyudZrohe

Brandon Morrow has built up to 120 feet in long toss. Will progress to 135 feet and then 150 feet over the next two weeks. If all goes well, first bullpen session post-surgery will fall around March 25.

“Any time you get to start that first day, it’s pretty cool, especially for an organization like this.”

Happiest of birthdays to the queen of my heart ❤️