Cubs Rake, Webster Will Contribute, Contreras and Venezuela, and Other Bullets Skip to content 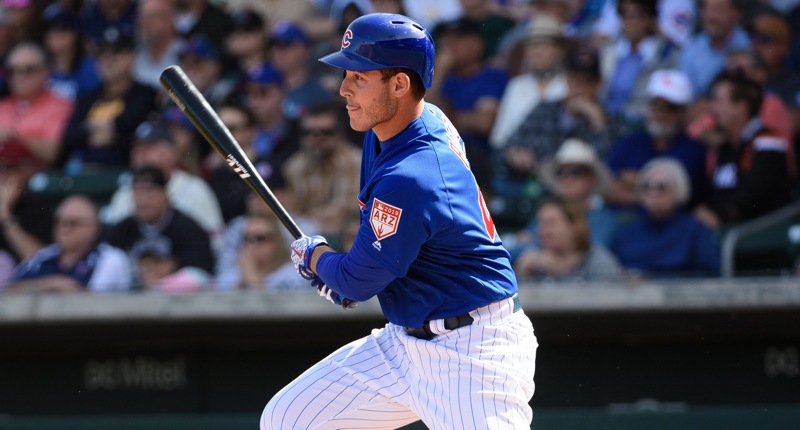 The Cubs worked over Marco Gonzales last night like he was still pitching for the Cardinals. Each of Anthony Rizzo, Javy Baez, Albert Almora, and David Bote had multiple hits, including an extra-base hit apiece. In total the Cubs netted 12 hits off of Gonzales in his 3.2 innings of work.

The pitching was mostly about the upper-level depth guys, with Duncan Robinson and Jen-Ho Tseng getting the first four innings, hoping to lock down AAA Iowa rotation jobs. But the guy who stood out, once again, was Allen Webster, who pitched two scoreless innings (he keeps getting multi-inning appearances … ), allowing just one hit (a nothing dribbler) and striking out three. More importantly for our purposes, he finally appeared in a game that was on MLB.tv, so we got a chance to see how he’s looking right now. No one had a comfortable at bat against him and his over-the-top delivery and heavy sinker (though most were minor leaguers). The slider didn’t look especially nasty to me, but it was really hard for me to discern it from the sinker (no radar for the game), which means it’s gotta be brutal for hitters to delineate between the two pitches, which clearly tunnel together well – he was succeeding despite, to my eye, not having his best command in the zone.

Remember, Webster, 29, has the pedigree of a former top pitching prospect, so it wouldn’t at all be shocking to see him the kind of guy who dealt with injuries, struggles as a starter, and then finally put it all together as a reliever in his late 20s. We’ve seen it many, many times before. Webster is currently on a minor league deal, but I expect we’ll see him contributing – at least as an up-and-down guy – this year. (EDIT: Whoops. Apparently Webster is out of options, so once he comes up, the only way to send him back down is if he clears waivers.)

An in-depth side you haven't seen before. pic.twitter.com/2ea1XZo6TW

The big reveal of your new left field seating. pic.twitter.com/L6MgzGBV7w

More context: The Astros’ two-year offer to Martin Maldonado at the beginning of the winter was for $12m total. Mets also had serious interest before signing Wilson Ramos.