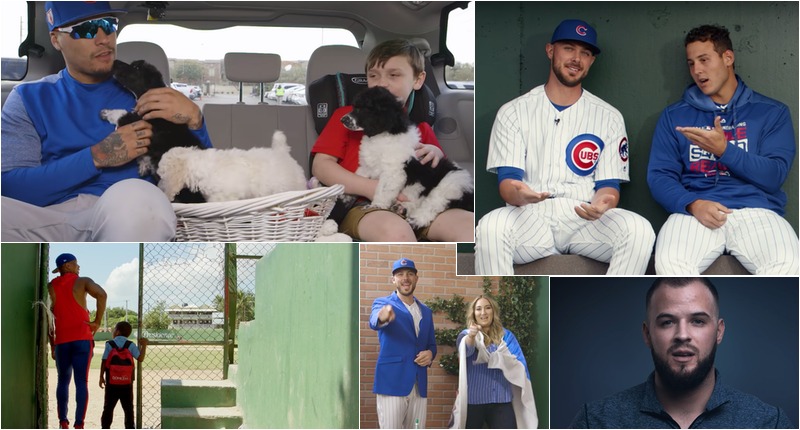 When the Cubs new TV channel, Marquee Sports Network (MSN), launches ahead of the 2020 season, it’ll have a whole lot of time to fill outside of the actual games, themselves. Obviously, there’ll be all the usual pre- and post-game shows, some new shows, and probably even some other sports, but 24 hours a day, 7 days a week, 52 weeks a year is a whole lot of space for #content.

Fortunately, the Cubs were just handed a golden opportunity. Before recently, Major League Baseball actually still had control over the individual team YouTube channels, not the team’s themselves (by contrast/for example: the Cubs, themselves, control their own Twitter, Instagram, and Snapchat accounts). But after seeing how some of the teams took their social media channels and really ran with them – the Twitter accounts of the Cubs, Rockies, and Indians come to mind as higher quality follows – the league decided to give that control back. Enter: Cubs Productions.

With a somewhat new (lowercase) channel for video content, the Cubs Production team was given a golden opportunity to test out different shows, which I believe could eventually find their way onto MSN (though, surely some of these are always meant to remain on YouTube). I was fortunate enough to get a sneak peek at some of these shows at the Wrigley Field offices yesterday, and boy let me tell you … we are all in for such a treat. Here’s a look at some of the videos I got to see yesterday:

The Offseason is a pretty straight-forward documentary style look into players’ lives over the winter. I got to watch Pedro Strop’s episode, below, and it was absolutely fantastic. Strop takes the camera crew back through his hometown of Palenque, D.R., sharing his joy for life, baseball, family, and friends.

I already knew I loved Strop, but this really locks it in:

My personal favorite show, “The Breakdown,” is going to be a total treasure trove of binge watching throughout the season. Basically, this series is meant to isolate one play/inning/moment from the season with intermittent commentary from the players and coaches involved, as well as some looks at the advanced stats that drove those decisions. The first one? David Bote’s ultimate walk-off grand slam from the 2018 season (I believe Ian Happ’s Opening Day lead-off homer is up next):

“Bae vs. Ballplayer” is one of the more light-hearted and fun video productions, featuring a newlywed style game show where one player’s wife/girlfriend squares off against their significant other’s teammate. First up: Anthony Rizzo vs. Jessica Bryant (there will be new Baes and Ballplayers every episode):

Call to the Bullpen:

“Call to the Bullpen” is another light-hearted endeavor, wherein fans can “call” their favorite Cubs duos and ask personal, life advice. Sometimes the advice is good … sometimes it’s hilarious. KB and Rizzo took the first calls, but I believe Ian Happ and Kyle Schwarber are next:

The first video in the “Cubs and Pups” series follows Javy Baez. It was introduced to us like this: “It’s Javy Baez and puppies, do you really need to know more?”

“Make it Cubs” is a more typical YouTube style DIY show, helping the craftier Cubs fans among us make fun stuff for their homes and friends:

There are actually many more shows than just this – and many more videos from each show – coming soon. We were told there will be new content every single Thursday, so be sure to head over to www.youtube.com/cubs for more.

The Cubs Production team REALLY outdid themselves this offseason and I really think you are all going to love every second of it.